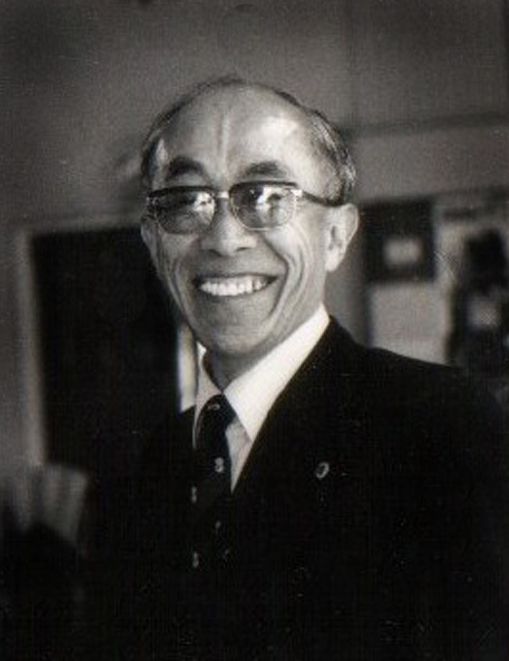 
Many of you know that recently we held the third annual kendo gasshuku for high school students at the Kenshikan. The aim is to improve the quality of Australian kendo through building the number of young people who love kendo.

At the gasshuku, some of the young kenshi trained harder than they had ever trained before. A few of them reached the point where they felt they couldn't go on. Tears, wanting to vomit, being unable to breathe, they experienced the full range of physical and psychological symptoms of going beyond their limits. 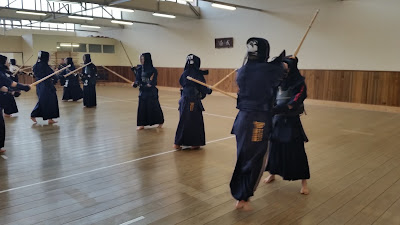 In kendo culture this is a sign of the best training you could hope for!

Everyone who has been there knows that it's really an unpleasant place to be. For a young person who has not experienced anything like it before, and who doesn't know that it is temporary, it is even more frightening. It can feel like the end of everything, like a near-death experience.

Of course the important thing about these kind of experiences is not that they are fun or some kind of 'macho' badge of toughness, but that we come to learn that we can survive them. At the end of the training session where some had reached their limit I felt that it was important to let them know this.

The best way to explain something is to embed it in a story, and fortunately Nagae sensei had told me a story of when he had survived similar experiences and what that had done for him. He told me that in 1933 when he was only 12 years old his father sent him to train at the dojo of Kokushikan Senmon Gakko (later Kokushikan University). Kokushikan has always been regarded as one of the strongest universities for kendo. Nagae sensei, as a quite frail, asthmatic boy was up against young men who had no concern for his safety or well-being. This was the pre-War era when the ethos of kendo training was preparing for actual combat. Nagae sensei found out later that some of the Kokushikan team would put lead weights inside their shinai near the tip to give them more weight and a louder sound when striking.* This meant they would be more likely to score the winning point in matches that, at that time, were adjudicated by a single shinpan solely on whether a strike would have been a decisive, killing blow.

He told me that he cried before training, he cried during training and he cried after training. The blows of the university students were so hard he was in a lot of pain during and after training, and of course there was the fear in anticipation of going back. One can only imagine what it must have been like!

But he said that this experience came to his aid many times in his life, not least of which when he was sent to Europe after the war to research new industrial techniques for his employer Snow Brand. As a Japanese amongst war-scarred Europeans, Nagae sensei was the target not just of racism but open hatred and threats. He told me it was quite common for Japanese businessmen in such circumstances (and there was a number of them it seems) to commit suicide rather than ask to return home. It was against this extreme stress, fear and isolation that his tough experiences at Kokushikan came back to protect him. He was able to put his present troubles in context, knowing he just needed to keep going and he would be OK. If his early experiences had not been so terrible, if they had been merely unpleasant, he might not have found them so helpful later on. I would suggest that the protective factor about his time at Kokushikan was that those experiences threatened his very survival. It was a near-death experience over and over again, if not in the physical sense then at least in the psychological sense.

As I told the story, I knew that it was giving some tired and stressed young kenshi the chance to regroup internally. There was silence in the dojo, the kind where you know people are listening. Some of the more experienced kenshi who knew Japanese kendo but not the story were nodding in agreement, marvelling at the idea of a 12 year old training with the powerhouse Kokushikan.

It was not long before I saw smiles on the faces that were earlier crying and stressed. And it felt appropriate that at the Kenshikan, his old dojo, Nagae sensei was teaching a new generation of kenshi the meaning of kendo. 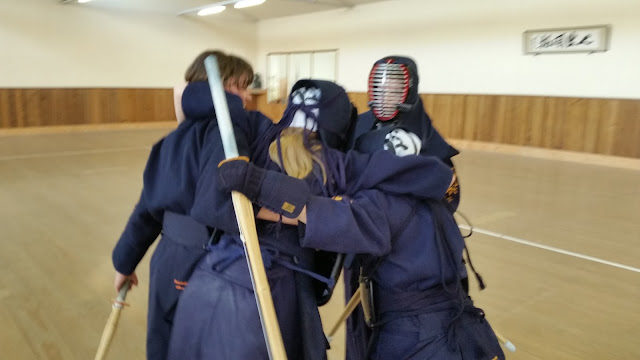 On reading back this article, it occurred to me that some might misconstrue my main contention, and believe that I was condoning abusive training as a positive value of benefit to young people. This is a fraught area and I have written about it before here:
http://kenshi247.net/blog/2009/04/07/traditional-sword-pedagogy-and-abuse/
(indeed I had forgotten I had wrote it, I thought George had! I was genuinely surprised to find my name at the bottom!)

Nagae sensei's childhood occurred in a much different world to the one I live in. Few parents would submit their children to exactly the kind of training that Nagae sensei told me about. But then, how hard was it really? His 12 year old self, recalled at a distance of more 70 years, remembered the university students as mountains, ruthless and cold. Would their treatment of him if observed by an adult be still considered extreme? And which adult? A contemporary Australian one or an early Showa-era, Japanese one? Male or female? Kenshi or non-kenshi? Most importantly, was I guilty of driving the students at the gasshuku to such abusive extremes?

All I can say is that their training at the gasshuku was less than one tenth as hard as what I would consider 'hard'. Perhaps if and when these students reach my age and stage of Kendo they will think about this first gasshuku and wonder at two things: a) how hard it seemed, and b) how easy it actually was!

*Almost as confirmation of this, the current Regulations for Kendo Shiai state:


Article 2: The specifications of Shinai referred to in article 3 of the Regulations shall be as follows:

1. Shinai shall consist of four slats and shall not include therein other objects than the core inside Sakigawa and Chigiri inlaid at the end of the Tsuka...