The example on the right is the correct one. In Japan the maru ○ is used where we would use a tick.


Here at Shugo-Nanseikan, I've written about suburi more than a lot of other concepts or techniques. That's because over the last ten years, with all the work I've done on my own Kendo and with other kenshi of different ages, the thing I've found that makes the single biggest difference to a person's Kendo is their commitment to doing suburi everyday.

This may not be the case where you are, if you are not a Nanseikan student and you have different opportunities to train. If for instance, you train more than four times per week, your Kendo will improve without suburi. But for my students, given our timetable and other factors such as age, fitness level and motivation, suburi is the thing that makes the most difference. It helps both the new beginner who is not very strong as well as the experienced kenshi building up to shiai. It helps each in different ways but it helps equally, and it never becomes obsolete.

But it needs to be practiced every day, or at least most days.

diagram showing where your suburi should finish, for straight suburi (left) and diagonal suburi (right)

How much is enough suburi?

The short answer is: any amount that you can do every day without injury.

The basic premise of all kinds of training is that as you get stronger, you should increase either the load or frequency, depending on what kind of results you want. However, the first hurdle to conquer in this instance is not physical weakness but mental weakness.

You have to train yourself to make the time to do the suburi.

When you start to look forward to doing the suburi, or alternatively if you start to feel like something's wrong if you haven't done your daily suburi, then you have overcome the first hurdle. The next step is to increase the load or frequency. 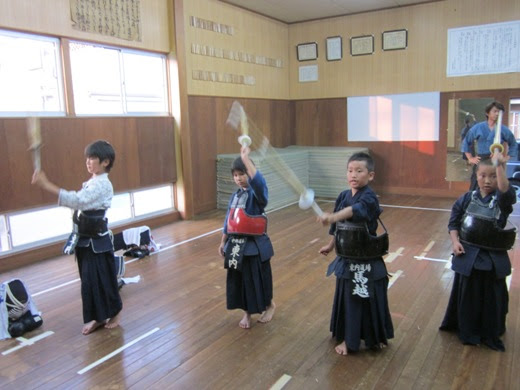 
How do I know what suburi to do?

In the beginning stick with straight, two-handed men*. This is the most fundamental technique in Kendo and helps to ingrain straightness as well as requiring tenouchi. If you can do it outside or you have high ceilings it's best to do it standing with footwork. If not, you can get a lot of benefit from doing suburi while sitting in seiza.

When you want to increase variety the next suburi to practice is, like the kids above, left-hand only suburi (katate-men). Keep the cuts very straight and clench your right fist on your hip, like the boy on the right. If you are not strong in the arm or wrist, start by gripping the tsuka (handle) closer to the tsuba (hilt). As you get stronger your aim is to be able to do straight cuts with your left hand down the very end of the tsuka. Never do right-hand-only suburi, at least not until your second decade of Kendo.

No matter what suburi you do, you must keep the following things uppermost in your mind:

The ethos of every day

There's an oft-quoted urban myth of the swordsman who could never get to the dojo but instead did 1000 suburi every day and thus became great. It sounds simplistic but there's more to it than at first appears. That's because the difficulty lies not in the actual suburi (1000 suburi is not as hard as it sounds, takes 20-30 mins) but in the making time for them and then sticking to it. If you have that willpower, you have already distinguished yourself amongst your fellows. Amongst most people who do Kendo, I would guess an average of only 20% do suburi regularly and only 10% everyday. But I would also guess that above a certain level—let's say 4th dan—that this percentage increases dramatically. I'd be willing to bet that more than 50% of experienced kenshi have a solo practice they commit to every day. And my hunch is that above 6th dan that figure would rise to more like 90%. 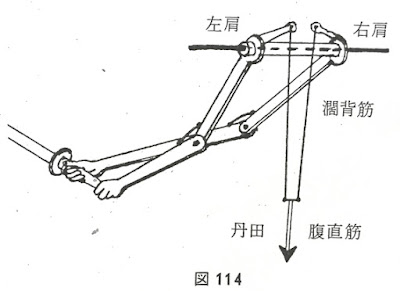 a visual representation of how suburi connects to the core (tanden)

The ethos of insight

Bruce Lee once said that he didn't fear the man who had practiced 10,000 kicks, but he did fear the man who had practiced one kick 10,000 times. What he was talking about was depth of insight into not only the movement but also oneself. Related to the point above, the attitude of commitment enables one to reap rewards that remain out of reach otherwise. There is a level of understanding that is not conceptual or nameable, it is simply demonstrated by how well one can perform a technique when required and with consistency.

With suburi, one of the things we are doing is maintaining muscle-memory with regard to manipulating the sword. The sword is a tool that works only when used precisely, even though this cutting movement is a simple one. The human body is always failing in its ability to re-create this precision movement, because the sword and the human body are fundamentally different. With suburi, one is engaged in maintaining the discipline and precision of co-ordinated muscle use necessary for a successful cut, as well as learning new things about how the body and this linear object interact.

On the one hand there is the action of the hands, arms and shoulders in relation to the cutting action itself. Then there is the action of the lower body, the mechanism that delivers the cutting action to the opponent. These need to work together, which is why suburi usually has a footwork element even if it is only forwards and backwards on the spot.

Through repetition, a kenshi gains insight not only in how to perform these upper and lower body actions efficiently, but also begins to understand the connection between them. She or he realises it's not just about arms and legs but also about the spine, the muscles of the core, the hip flexors and buttocks, and how all of these effect posture, weight transfer and stabilisation.

Given this importance, it might seem a little strange that I have all but eliminated suburi from our regular training routine. However this is not because I don't believe suburi is important.

It is because I believe that most current members see suburi as a dojo-only form of training. It is my aim to put the onus squarely on the individual to do suburi themselves outside of training, by removing it from training as much as possible. I hope that those who do not do it at home will start to see their Kendo deteriorate, and will realise for themselves why it is important.

Of course if their Kendo does not deteriorate without suburi then it was a waste of time all along!

*  When you read this phrase and it doesn't even occur to you to snicker, you know you're a Kendo tragic.
Labels: solo training suburi