I have been training regularly at the Kenshikan lately, with Yano sensei and members of the Melbourne Budokai.

The Kenshikan has many interesting artefacts which are not uncommon for a dojo in Japan, but are quite rare for a dojo outside Japan. I thought I might create a pictorial journey for Nanseikan students to become aware of the significance of some of these artefacts, especially since most of you now have visited the Kenshikan in person for the purposes of attending a grading. 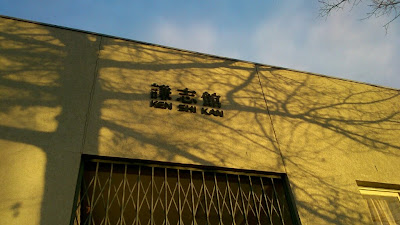 The dojo was established in 1990, after the donation of a large sum of money by the late Mr Kenshiro Otsuka. Here is the name above the front door, designed by long-time member and graphic designer Mr Peter Hocking. What does "Kenshikan" mean? Well it is a clever play on words: "Kenshi" (謙志) sounds like "kenshi" (剣士) which means swordsman. But these characters are from the name of Mr. Kenshiro (謙志郎) Otsuka (大塚). Kenshi, as in 謙志, means "aspire to humility", so the Kenshikan means the Hall of Aspiring to Humility. 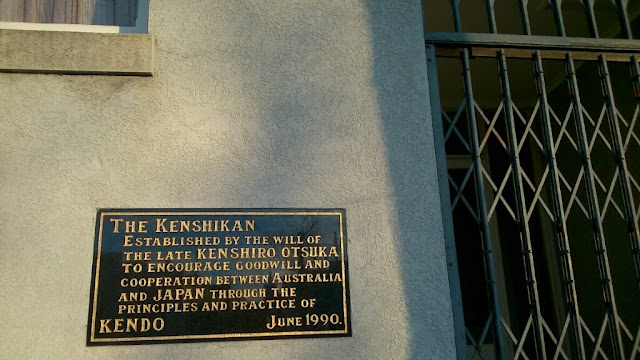 The dedication plaque, also at the front entrance. I'm always reminded of a gravestone whenever I see this. I'd be willing to bet money that it was made by a stonemason who specialises in funerary monuments. Of course that's just my aesthetic sense working overtime, the important thing is the content! 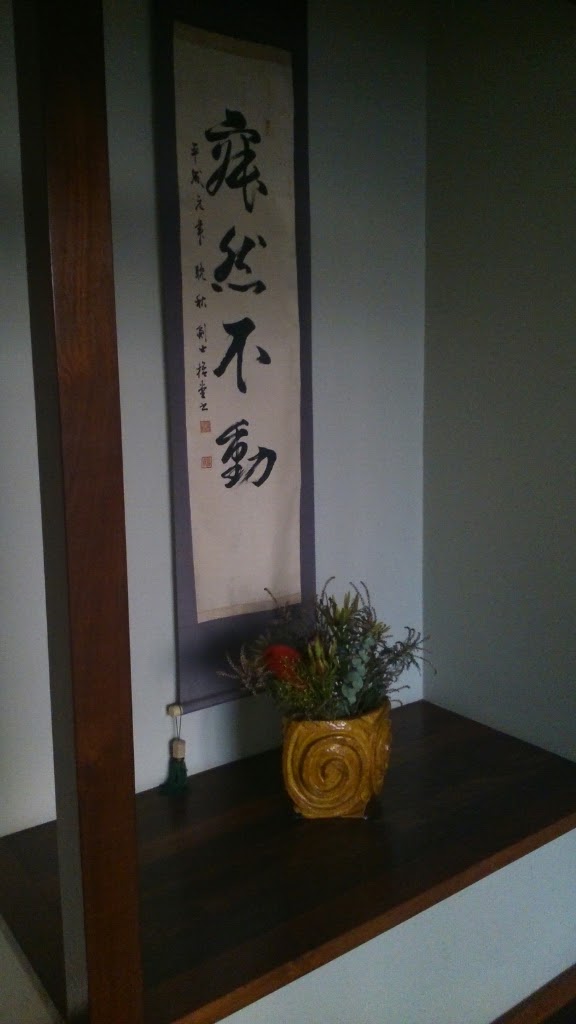 The tokonoma, just inside the front entrance. It says jakunenfudo 寂然不動 which is not an easy term to translate, but I do know it is the same four-character phrase that is used at the Mitsubishi Dojo in Tokyo. The tokonoma is the high place in a family home and it's sole purpose is to display significant calligraphy, flower arrangements or both. So please don't place anything on there, e.g. bags, or feet when you are putting on your shoes! 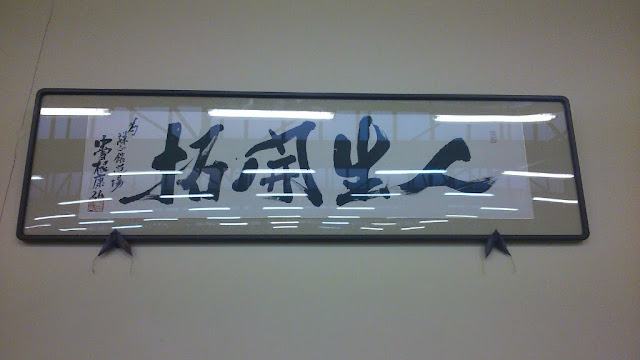 This calligraphy was brushed and donated by Mr Yasuhiro Nakasone, Japanese Prime Minister from 1982-1987 (which is a long time for a Japanese PM!). He visited the dojo privately not long after it was opened, and I have this souvenir of his visit below (spot the familiar faces if you can!). As to the calligraphy it says jinseikaitaku (人生開拓) which means 'developing human life'. 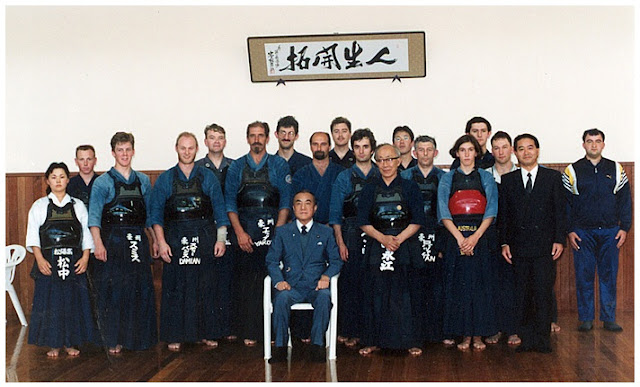 By the way, I was looking at the VKR's History page compiled by Gary Oliver and came across this picture of the guests from the opening of the Kenshikan: 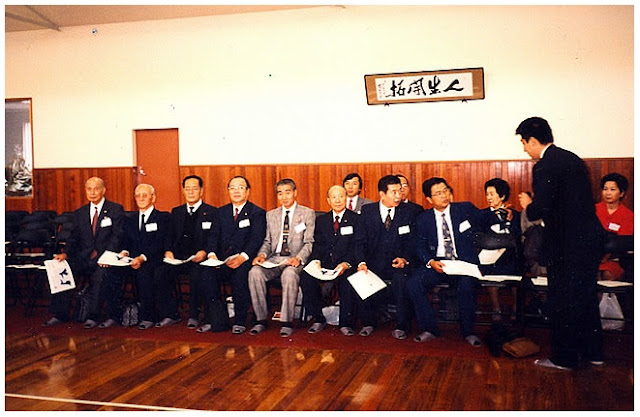 There's a huge amount of info on the VKR's history page. I highly recommend you check it out. 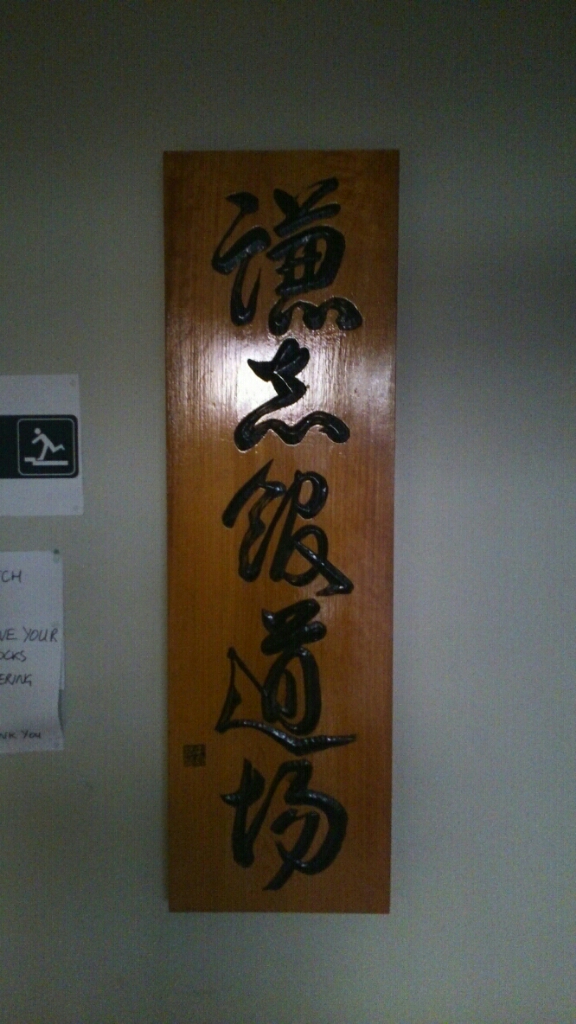 This object is an important one. It's just a sign with the words "Kenshikan Dojo"on it, and it is something that would normally be hung outside the dojo. Sadly, it wouldn't be possible to do this in Melbourne because it would get stolen (like the stone lantern did, and Nagae sensei's new bogu bought for the opening...). What most local kenshi don't realise is that this calligraphy is by Nakakura sensei. He probably didn't carve it, there are artisans who do that in Japan. He would have just brushed the original design. Nevertheless it is an important piece, because, unlike the joseki, it was created solely for the Kenshikan. 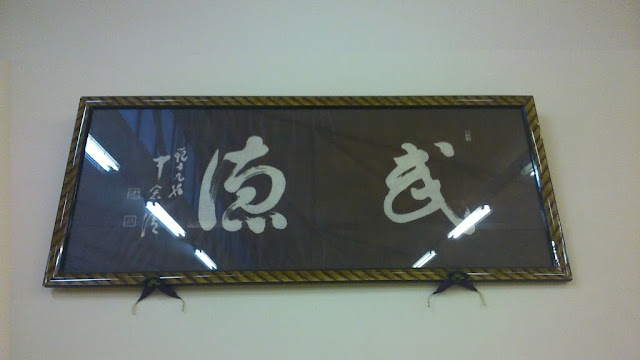 Here is the Kenshikan's joseki, also by Nakakura sensei. It says butoku (武徳) which means 'martial virtue'. Nagae sensei once translated it to me as "braveness and courtesy". He was simplifying, but not oversimplifying I think. Interestingly, I have a tenugui of this exact design, which is what caused me to look at it a little closer... 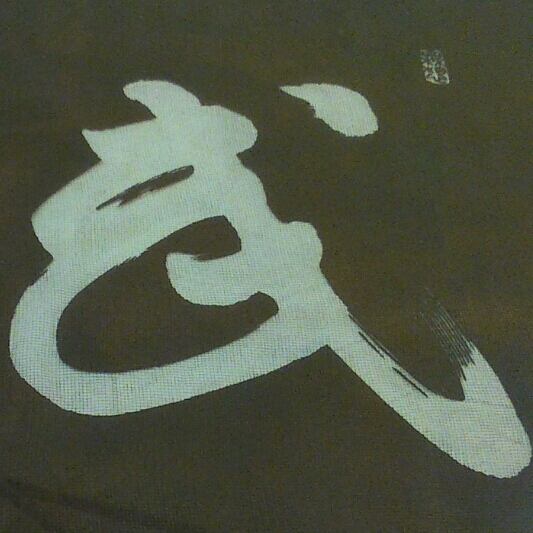 This is, in fact, the original screen from which that tenugui was made. You can see the black areas are solid paper (usually treated with persimmon juice to make it more durable) and the white areas a clear mesh through which the ink can pass. I'm still unclear on exactly how these kinds of stencils are made, and also how they print a tenugui on both sides, which is something I should find out since I have two Bachelor's degrees in Printmaking! So Nakakura sensei donated the original stencil to the Kenshikan. I think there was some debate at the time as to whether this or the Nakasone calligraphy should be the joseki. Nakasone's was considered purely because he was such an important man. However Nagae sensei chosen the one above, not only because Nakakura was a Kendo sensei, but also because the term butoku was close to Nagae sensei's heart. 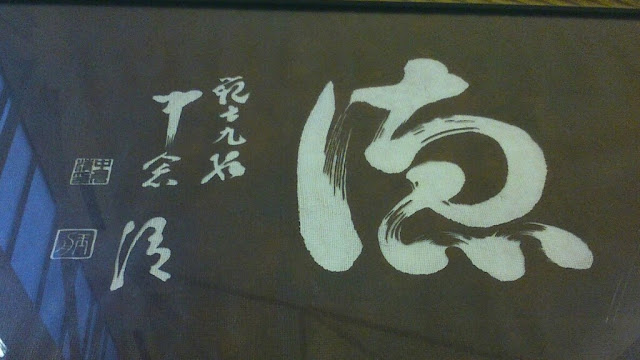 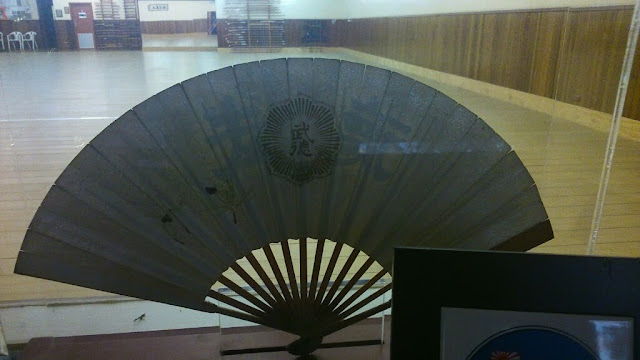 You can see this fan has the same kanji, butoku (武徳), on the back. This is the logo of the Dai Nippon Butokukai, the predecessor of the All Japan Kendo Federation. Nagae sensei's father was a member, and this fan belonged to him. 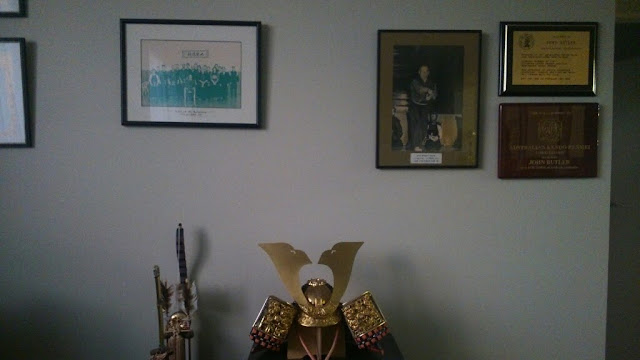 In the meeting room at the front of the Kenshikan there is lots of memorabilia, not all of which I know the significance of... But above you can see a framed version of the Nakasone group portrait, and a picture of John Butler doing iaido at Melbourne Town Hall, at a demonstration I took part in, in 1984! John Butler was a founding member of the Melbourne Kendo Club. He had started Kendo and Iaido in England, then emigrated to Australia and had to start a Kendo club here because there weren't any yet. He regularly tracked down visiting Japanese businessmen who had some Kendo experience through the Japanese Consulate in Melbourne. This was how he found Nagae sensei. The rest, they say, is history. John was a great storyteller, a strong kenshi and a wonderful person. 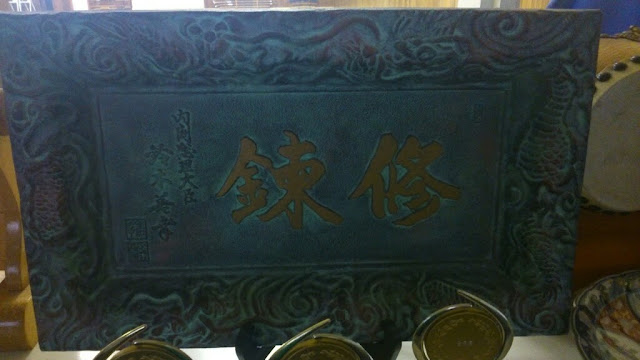 No idea where this is from,  but it is a copper casting of the kind of sign that would hang above the entrance to a large, old dojo or temple entrance. The kanji says shuuren 修錬 which means 'training'. 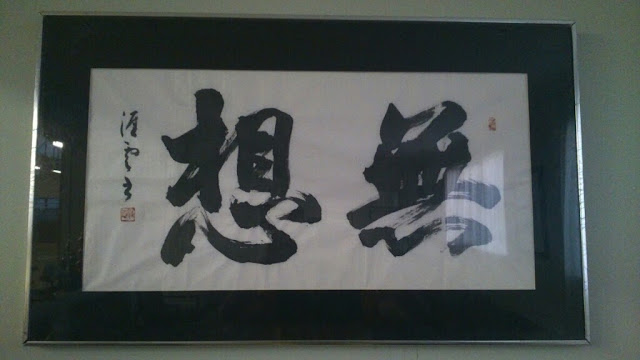 This is the original joseki of the Melbourne Kendo Club, brushed by Mrs Nagae's calligraphy teacher whose name, sadly, I don't know. It says muso (無想) and means 'no thought'. This was the joseki that hung in the YWCA gym in Elizabeth St when I first started Kendo. It now hangs in the meeting room in the Kenshikan. 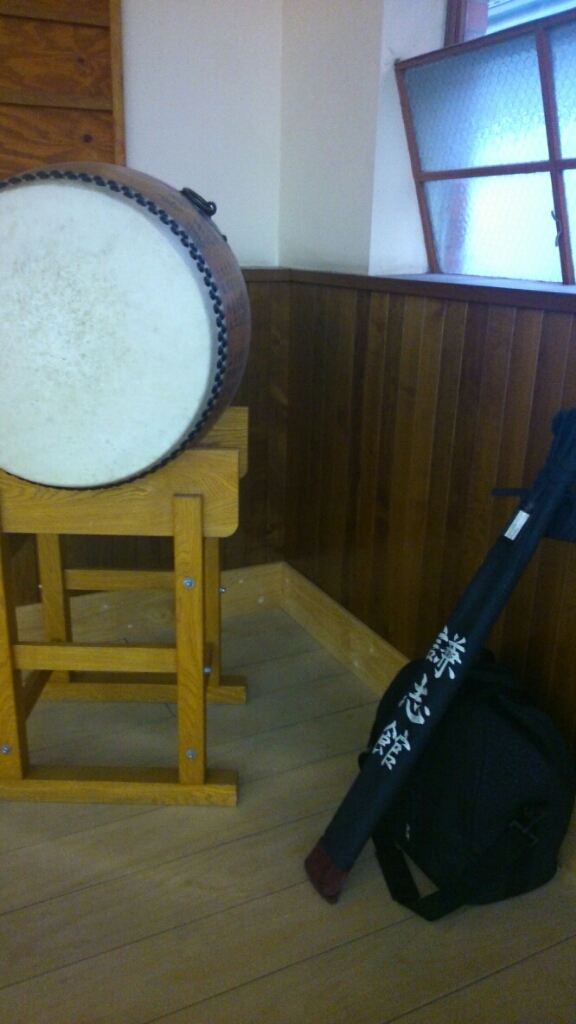 The large taiko of the Kenshikan, which has the Otsuka family tree written on the side, and the date and occasion when it was given to the Kenshikan. In the picture is also Yano sensei's bogu and shinai bag, the latter you can see has "Kenshikan" written on it in Japanese. 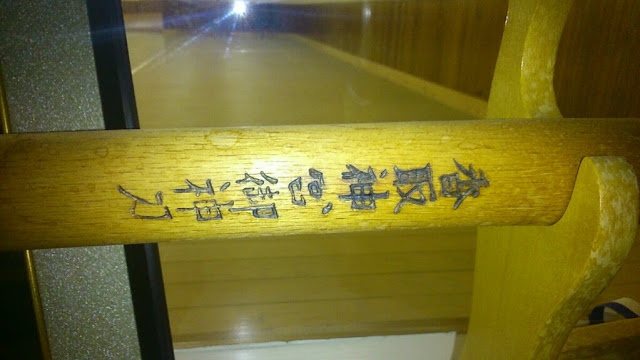 Various of the dignitaries who came to the Kenshikan opening brought auspicious gifts, such as these bokuto. The one above says 香取神御神刀, meaning Holy Sword of the Katori Great Shrine. This is the same shrine that is the home base of the Tenshin Shoden Katori Shinto Ryu school of swordsmanship and weaponry, and a very important Shinto Shrine for the Japanese martial arts. 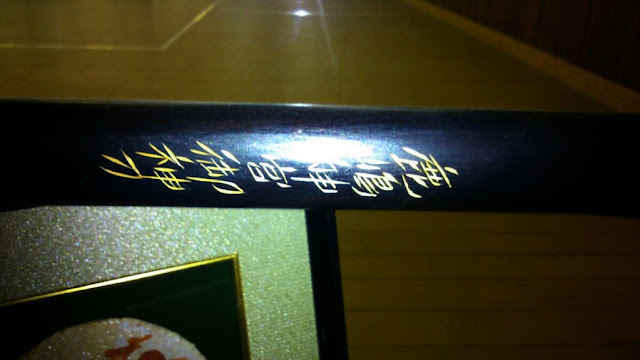 This one is from Kashima Shrine, the other great shrine for swordsmanship in Japan. 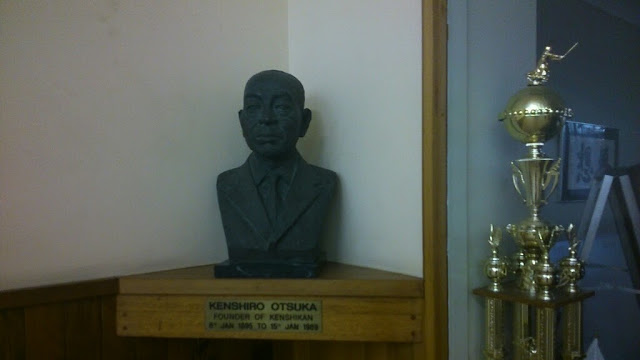 This is a bust of Mr Otsuka, who made his fortune from charcoal, and who unfortunately never lived to visit the Kenshikan himself.

So that's a brief cultural journey through the Kenshikan. Feel free to ask any questions you like down below in the comments and I'll endeavour to find answers and update this article with them.
Labels: dojos

You were wondering how the printing process of tenugui works. I remember having seen a youtube video of the process once, but I can't find it anymore.

Thomas Sluyter said…
It's not the video I watched before. That particular process used a slider/wiper to pass around ink.

But this one shows the horribly labor-intensive job that is screen printing of tenugui.

In this case, the double-sided printing is achieved by having screens on both sides of the fabric. Instead of using thick paint, they use very thin ink which passes through the stack of screens and fabric.
September 12, 2013 at 5:28 AM

Nanseikan said…
Thanks Thomas. Those links will help me to try and work out how they do it, although to a Western-trained printmaker it still doesn't make sense... horribly labour-intensive indeed!
September 12, 2013 at 2:45 PM