We have a state championships. What about a state gasshuku? 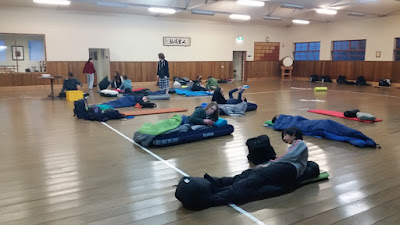 The Concept of Kendo says that the main point of Kendo is to discipline the human character through the application of the principles of the Sword. I take this to mean that Kendo is primarily about self-development, and also the development of human relationships, through the medium of Kendo.

Competition and winning are specifically and deliberately absent from the Concept of Kendo. This was indeed one of the main reasons it was drafted (in the mid 1970s I believe), to articulate what had, up until then, been an unwritten understanding about the nature of Kendo, and indeed all Japanese budo. As Okada sensei pointed out in his Saturday lecture a few weeks ago, the history of swrodsmanship in Japan was originally about warfare, then became about personal cultivation, and then only relatively recently, since the Gekkiken Kogyo of the late 19th Century, did it become at all competitive.

However because there is a competitive component to Kendo, and because sportive competition is something that has a prominent place in world culture, it seems that we default to a position of placing competition at or near the centre of things, even in Kendo. Proof of this is the amount of time and energy that goes into organising the major championships. And not just that, but training and selecting for them.

To be honest we do very well having a rigourous and life-long process of grading exams based on performance in Kendo. This certainly helps keep the focus on personal cultivation and is something that is available to all.

However gradings are quite a personal, individual thing. We don't come together to help people with their gradings. There are not state 'grading' squads. People are expected to do that during their 'normal' training time with the help of their sensei.

There is the opportunity to create a new tradition that brings people together, sets challenges and furthers the goal of human development through Kendo.

We need a state, and maybe even a national gasshuku. There already exists an international gasshuku of sorts, in the form of the Annual Kendo Leaders' Summer Camp in Kitamoto. But one a little closer to home and more accessible is called for.

Imagine if there was a gasshuku that had something like the organisational and logistical support of a state or national championships, and the same kind of kudos attached. Instead of only a few people coming away with the benefits, everyone did. People getting rewards, not awards. Where the focus was not on celebrating the individual, but on strengthening friendships and deepening knowledge.

I propose a 10 day gasshuku schedule that all kenshi around Australia follow as best they can, coming together in their capital cities' main dojo, at the same time; much as Muslims do when they practice Ramadan. It wouldn't require as many resources as running a taikai, and would impact many more people.

The schedule could follow a similar one that runs currently in Osaka, a gasshuku that is not residential like the picture above, but that takes place around people's exiting schedule of work and school:

Building in a social aspect, specifically eating together after training whether it be regular breakfasts or dinners, would further cement the bonds of participation.

Such an event could become a real focus of the Kendo year for all practitioners. I believe that there's no reason why it should not become equally or more important than the state and national championships themselves.

What do you think?