Kihon waza backswing - how big should it be?

Another thing that I spoke about last class, and which I often remind people of, is their backswing.

In kendo, 45 degrees and 90 degrees are considered a kihon backswing. Your backswing never needs to be bigger, and in certain situations can be smaller than this.

Again, for visual learners especially, please consider the diagram below.

The test of whether your backswing is big enough, is whether you can see your opponent's target area (datotsubui) beneath your left hand. 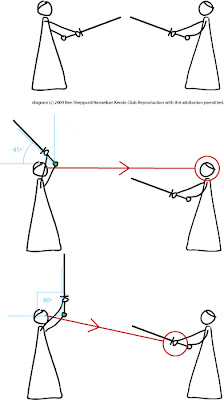