Tying up the elbows for better technique 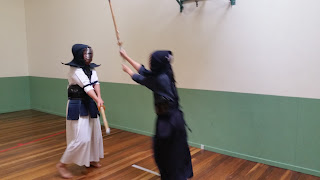 Yesterday we did an interesting exercise that carries on from my thinking about Kendo, geometry and robots.

We tried tying our arms together with old himo (laces) above the elbow and then performing kihon men. As you can see from the pictures, students were told to tie their arms together quite tightly. Tight enough so that some of the kids complained of discomfort. One was even prompted to exclaim, "Oh, my precious elbows!" which is about the second best thing I've ever heard said in the dojo.

But interestingly there was very little impact on people's ability to perform basic men cuts. Both from my observations, and also from self-reporting after the exercise. Most students reported either no difficulty with their technique or an improvement in their technique. Why? 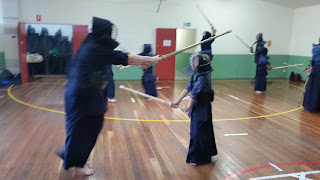 The reason I believe is excessive flexion of the elbows, a common beginners' mistake that makes accuracy and consistency more difficult. Elbow flexion increases the overall tendency of the shinai to be able to veer and wooble through the air unpredicably. After all, the more joints you have, the more movement possibilities you have. Using the sword correctly however requires fewer movement possibilities, so reducing the number of joints involved in the action from six to four logically improves accuracy. Severely restricting the ability of the elbows to move during the cutting action shows the student how little their elbows contribute to the performance of an effective men cut. 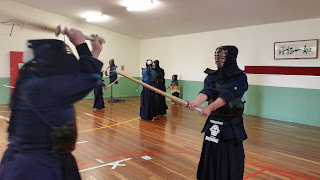 Now there are many ways to skin a cat, and I know of experienced kenshi who use the elbows to great effect in their kihon waza. The key word here is experienced. Also, as I mentioned in training yesterday, the very vertical, up-down cutting action that Kendo employs, based as is it on Itto Ryu, is not the only way to use the sword. Tatsumi Ryu and Katori Shinto Ryu for example, both use cutting actions that are circular rather than linear as the basis of their kihon uchi.

However in the context of a Kendo club that teaches fundamentals to a wide range of ages and abilities, the desire is to find the most effective, efficient and easy-to-understand way of using the shinai, that nonetheless still matches the logic of using an actual sword (刀法 - toho). I think that this exercise is a great way forward in this respect.

If you try it out yourself, please leave a comment and let me know what you think. We only used it for kihon men. Next week we might try kote and do as well. I think it might even prove more useful there too, as the position of the elbows in the cut has an important influence on which part of the palms of the hands make contact with the tsuka, and how tenouchi is employed, which again has an impact on accuracy.

The only drawback is that it does make reiho pretty much impossible! 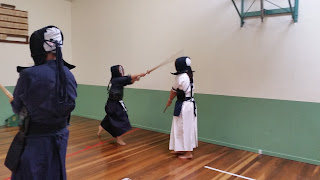