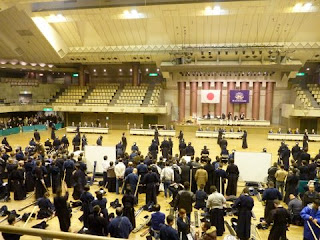 Last Sunday I was on the grading panel for the VKR 1st kyu to 3rd dan gradings. I thought it might be useful to record my impressions here of what the grading participants needed to work on for next time.

Seeing/setting up an opportunity
This is difficult to put into practice. All candidates except one for 3rd dan were unable to show they understood where and when the openings were and hoped that by simply attacking there would, by the time their cut landed, be an opening. In other words they hoped that their attack itself would create an opening.

Courage
The reason for this is nerves, or to put it another way, lack of courage. When facing an opponent in jigeiko (free-sparring), shiai (competition) or jitsugi (grading match), it is natural for a feeling to build up between opponents. When this feeling gets too much, one person will break and launch an attack. At junior levels this always seems to happen with a regular rhythm. It takes courage to hold back in the face of this build up. It is like watching a wave coming closer and getting bigger as it nears. As this feeling—let's call it aiki— gets bigger, most people's fear increases and they lose their nerve, so they attack, without really knowing what they are attacking. Sometimes they mistake this "don't know" for mushin (無心 'no mind'). But mushin is very different, it's the opposite of "don't know" in fact.

A simple remedy is to count to ten. Say to yourself, "When I stand up into kamae, I will not launch an attack until I have finished my count to ten, no matter what my opponent does. If they attack, they will run onto my kensen." When you do this, you will notice your fear lessen, and your ability to observe your opponent increases. You will feel more confident and more in control of your own Kendo. Even in a jitsugi of only 60 secs there is no need to rush.

Breaking through
A number of people who failed 2nd and 3rd dan did so because they were unable to break through and score a valid ippon. By "breaking through" I mean finding a way to overcome a difficult opponent. These were people whose Kendo is easily up to standard but who failed to be effective on the day.

Usually a simple change in strategy is enough to achieve this. Men not working? Try do instead. That kind of thing. At 3rd and 4th dan, this kind of ability is very important. It shows adaptability, persistence and that you possess a range of waza.

Being unable to 'break through' in this sense is often a sign that you are stuck in a rhythm but you can't see it. Again, when you find yourself in this situation, stopping and counting to ten whilst keeping an active kamae can give you the breathing space you need to achieve that break through.

Xia said…
Regarding chakuso: I know for the longest time I was one of those with a keikogi that was too short. I was painfully aware of the fact but due to financial reason, I could not afford to buy a new gi. Food, kote repairs, new shinais, came first before better fitting cloth -_-

Nanseikan said…
Good point Xia, thanks for bringing that up.

In that case I would say to make sure you always wear dark coloured underclothes that are long enough to cover your upper thigh: boxer shorts, leggings, etc. Preferably navy blue. If you do this and make sure you don't have any skin showing, the shortness of your keikogi will not be so noticeable.

There are also some pretty inexpensive keikogi out there these days. Most of us can relinquish some small luxuries (daily take away coffee and muffin anyone?) for a time to save up some extra cash when needed. b
October 6, 2012 at 11:08 AM