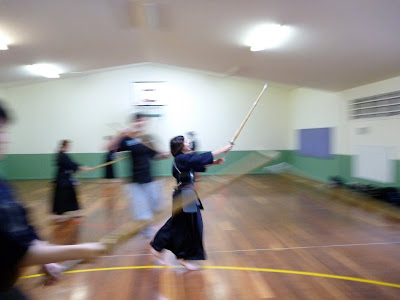 Zanshin translates as "remaining mind". In basic terms its kendo meaning is follow-through. Zanshin in its fundamental form means moving forwards after completing one’s attack and hence passing by one’s opponent, then at a safe distance quickly turning and taking up kamae ready to continue, regardless of the success or failure of one’s previous actions.
In other words, you follow through the same whether your cut scores or not. It is the readiness to follow-through both with your body and your mental attitude.
Zanshin is a natural by-product of one’s commitment to, and momentum from, the attack. It cannot be added if/when one sees one’s attack has been successful. If you do try to add it on after you've seen that your attack worked, then it only shows that the attack itself was a fluke.
Kiai in the form of a sustained, powerful voice should be used to assist zanshin:
ME~~~~~~~~~~~~~~~~~~~~~~~~~~~~~~~~~~~~~~~~~~~~~~~~~~~~~~~~~~~~~~~~~~~~~NNN!!!!!!
Zanshin is expressed in the Bokuto Kihon not as follow through, but as a mindful drawing back to distance, maintaining focus on the opponent by keeping the kensen pointed at their throat. Your threat is not lowered until you return to kamae.
Zanshin is expressed in Nihon Kendo no Kata in various ways appropriate to the techniques employed in each kata: sometimes following through (sanbonme, nanahonme), sometimes drawing back (gohonme), sometimes taking a new kamae such as jodan (ipponme, ropponme).

Zanshin and sutemi are inextricably linked. Your commitment to your attack results in a momentum that cannot be stopped and must be expressed somehow. This expression is zanshin. It also can refer to a kind of "situational awareness". This is a term used in Military and Law Enforcement training to describe a mind that in always alert for danger.
Labels: zanshin