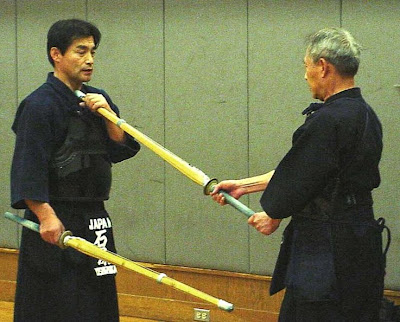 Ishizuka Yoshifumi sensei (Kyoshi 8-dan, on left) demonstrating where you should point your kensen.
As I write about basic strategy, there are many concepts that come up that need more explanation. Chushin, or the centre, is definitely a very important one and deserves its own article. Understanding chushin is the key to knowing whether there is an opening, an opportunity, to cut your opponent.

Meaning
Chushin is written with two kanji: chu (middle) and shin (heart/mind). It means the core, the focus, the pivot. We might say in English, "going to the heart of the matter." This is a good way to think of chushin in kendo.

How big is chushin?
Chushin is partly real and partly abstract: partly a thing you can touch with your hand, and partly an idea. 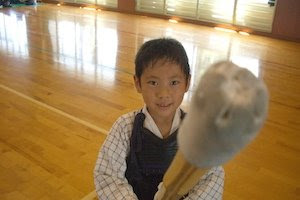 How can something that is an idea also have such a specific size?
If you think about it, it becomes clear. Only one person can control chushin at a time. The sakigawa is 3 cm wide. Therefore if your sakigawa moves away from the centre by 3cm or more, your opponent can now point at your throat, controlling chushin, the centre. Therefore chushin = 3 cm.

A quick but important exercise
Chushin and openings
An opening is when you perceive that your opponent's kensen is not pointing straight at your throat. Being able to perceive chushin accurately, and especially, being able to know whether you or your opponent is controlling it is important. Not only that but being able to be aware of this all the time is the key. This is very difficult to do.

Next time you are facing an opponent, whether it be during kihon practice, uchikomigeiko, or even a match, pay close attention to whether their kensen is pointing directly at your throat. This kind of observation of your opponent is vital if you wish to develop strategy and learn how to overcome them.

Remember: only one person can control chushin at a time.
Labels: centre chushin kendo theory strategy

Nanseikan said…
Glad to hear that you found it helpful. Thanks for leaving your feedback and がんばってください! b
April 25, 2009 at 9:33 PM