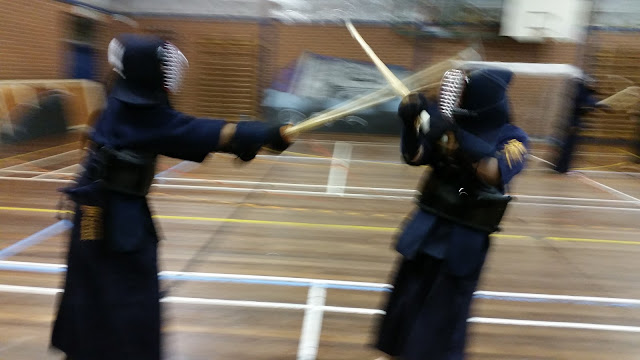 Recently I have noticed a lot of people with incorrect cutting action. Not just at Nanseikan but other clubs too. These people are all in their first few years of Kendo so it is understandable. But without extra effort and guidance, this incorrect technique could become a bad habit that is hard to break.

Broadly speaking there are two basic aspects that I'm referring to:

The action of the arms.

The action of the hands.

At the uppermost backswing, your elbows should be equally bent, the same as in jodan no kamae. Your arms should make the number "8" in Japanese, i.e. 八 with your fists at the apex. As you bring the sword down to the target, you bring your elbows together by rolling in your wrists, squeezing them together the same way we wring out the 'zokin' which we use to clean the floor before training. Rolling your wrists inwards allows you to straighten your arms as much as possible. This allows you to gain the maximum possible reach for your build.

It is crucial to make sure both arms are equally straight at the end of the cut. Most often, beginners have their left elbow bent at the moment of cutting because they are using predominantly their right arm to power the cut. If anything the left arm should provide more of the power.

Your elbows remain totally straight only momentarily. As important as it is to straighten them, it is equally important to relax as soon as the cut has been made. Your arms should retain the finishing position of the cut but without tension.

The action of the hands and wrists is even more important and subtle than the action of the arms. This doesn't mean you shouldn't work on understanding it at the beginner level. It just means that you will continue to understand new aspects of how to use your hands in Kendo for many years to come.

Basically your hands and wrists have to reach to the maximum extent. There is a moment of overextension at the point of impact, but, as with the elbows, this exertion only lasts for the moment of the cut, before the kensen rebounds off the target. The difference between the angle of the shinai at the moment of cutting and the moment of rebound is fairly well illustrated by the double-image of the shinai in the photo at top.

The shinai should never be extended at the exact same angle as the arms. Even at full extension, there should be a 5 to 10 degree difference between the arms and the shinai.

A good measure for both these aspects above is that the knuckle of the left thumb should briefly touch the muscle of the bottom of the right forearm (flexor carpi ulnaris) at the moment of cutting. This brief contact indicates not only that the angle of the sword is correct, but that the arms are working in unison. 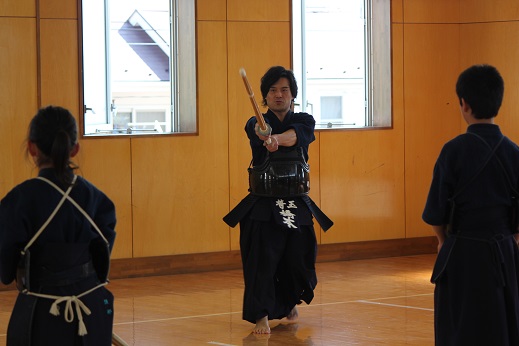