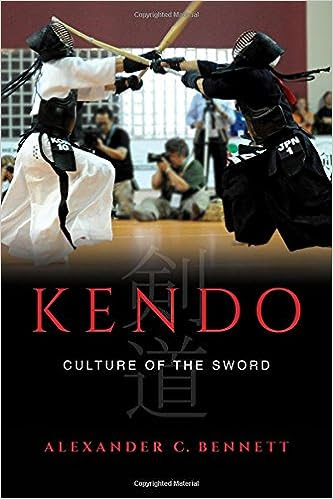 Well whaddya know? I was browsing eBay with the keyword "Kendo" and came across this, publishing date of 31 July 2015.

Kendo: Culture of the Sword is the new book by Alex Bennett, founder of Kendo World, NZ team coach and the go-to guy if you want to know anything about Budo culture but can't speak or read Japanese very well (just ask Anthony Bourdain and Terry Schappert), or even if you can but you need to have an expert on hand (ask Nicholas Pettas and even the national broadcaster NHK).

But Alex is much more than a TV tarento (celebrity), he is a bona fide academic in the area of Kendo and related martial arts. After doing a year as a high school exchange student in the late 80s, at some point he must have thought, "How do I stay in Japan to keep doing Kendo?" It's a question most kendo tragics ask themselves in their early 20s. In Alex's case he decided he wasn't just going to teach English at GEOS for 12 months and then go home. Like another well known Kendo über-tragic, George McCall, Alex dug deep and must have said to himself "Bugger it! I'm gonna stay here and do Kendo whatever it takes!" Fast forward twenty years and, hey presto, he's living the dream.

Kendo: Culture of the Sword is really the book he has been building up to writing for a long time. I've been aware of Alex and his work in this area since I first signed up to Kendo World forum in 2002. I think at that stage he had only just submitted his PhD thesis titled "Towards a Definition of Budo"; and in Japanese no less. Since then he has worked tirelessly in both academia and as a high-level translator. Along the way he has achieved his 7th dan in Kendo. He was even kind enough to help yours truly via email when I needed some inside info for a Masters' assignment on contemporary Japanese culture. Not that that last one was a life highlight for him, it just makes me slightly relevant.

Alex's academic background is strongly in evidence in this book. It is written as a reference work, containing scrupulous footnotes and referencing that acknowledges and builds on scholarship in the areas of Japanese history and cultural theory. In the internet age of bloggers, trolls and keyboard warriors, this kind of informed and disciplined writing is more valuable than ever. Not surprisingly it comes in a book. A hardcover one. Published by the University of California Press.

Part of this discipline is starting from the beginning. Alex explains what Kendo is in basics and then goes all the way back to explain its history in detail. Maybe it was my own impatience, but I got the sense that it wasn't until about half way through that Alex finished with his set-up and started getting into the meat of his thesis, that is, with those parts which are his unique contribution to the area. 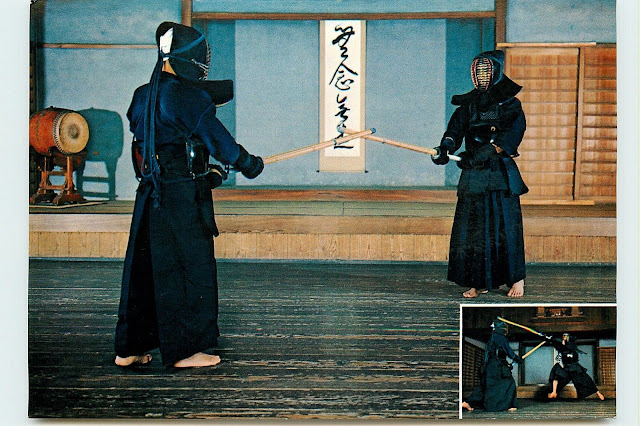 To my mind it is his examination of the role Kendo has played in Japanese identity from the Meiji era onwards that is the strength of this book. Very few scholars have had access to the sort of primary sources Alex has used. Hence he is able to shine new light on how Kendo has been continually 'repackaged' to suit the prevailing political needs of each era: Meiji, Taisho, Showa and Heisei.

Admirably, Alex keeps a sternly critical focus on these aspects, never letting his own love of Kendo, nor his 'insider' status lead him to making sweeping generalisations of difficult counter-arguments or gloss over legitimate criticisms of Kendo culture. For instance he questions the often nebulous and rarely (within Japan) criticised pronouncements on Kendo's 'character building' qualities. He also analyses the assumption held by most kenshi that Kendo is not a sport, and elaborates on the patently politico-cultural reasons for this belief. He also examines the notion of Kendo as a uniquely Japanese cultural product and the tension between Japanese desire for international promulgation of Kendo on the one hand and the fear of 'internationalisation' (read: dilution, misinterpretation) of Kendo on the other.

Indeed so new are these discussions, in both English and Japanese I would warrant, that many kenshi are bound to have difficulty accommodating them given the assumptions they have been taught about Kendo since day one of their beginners' courses. It is clear from the Epilogue that Alex has had trouble with this himself, and his answer is this book. For this reason alone I would recommend this book to anyone who loves Kendo.

Alex finishes with a wonderful observation from the late Yoshihiko Inoue sensei, a man for whom he has obvious respect. It is as if to calm the doubts that he must have been having about Kendo's legitimacy and purpose as a result of the long months of research and cogitation. I will leave to those who purchase the book to find out what that observation was. But as a result of some Google-jutsu after reading the book I came across a similar, very affirming observation of Inoue sensei's regarding the nature of Kendo:

The main objective of Kendo became (in the Taisho era) the development of the human character... meaning that through disciplined practice we develop the right mental attitude... one can contribute towards peace and prosperity for all humanity across the world, thus reflecting our own humanity. This is what it means to develop the human character in Kendo. Therefore something that cannot contribute towards peace and prosperity in the world cannot be called Kendo.


There are many reasons for enjoying this book: the clear and rigorous history that takes into account new ideas about 'invented tradition' and 'aestheticised swordsmanship'. There are many photos that I've never seen before, especially of shinai kyogi, the short-lived, post-War replacement for Kendo. As a school teacher, one of my favourites bits is Alex's translation of the Japanese Ministry of Education's Three Pillars of Kendo Education (2006), a curriculum framework document that simplifies Kendo's benefits into the kind of Powerpoint-friendly bullet points only an Education bureaucrat could love.

On a pedantic note, I was chuffed to read that Alex disagrees with the common English translation of the Concept of Kendo, which uses the term katana (刀). I have long felt that since the Japanese original uses the term ken/tsurugi (剣) it should be translated as: "...via the application of the principles of the Sword." Katana refers to a physical sword, whereas ken is the conceptual or metaphorical Sword. What English accomplishes with capitalisation and definite or indefinite articles, Japanese accomplishes with synonyms of approximate equivalence but quite different historical meaning. A minor quibble perhaps...

Alex is already the most lettered historian and theorist of Kendo in English. I think if and when he comes out with a Japanese-language version of this book, he will become one of the most important scholars of Budo in any language.