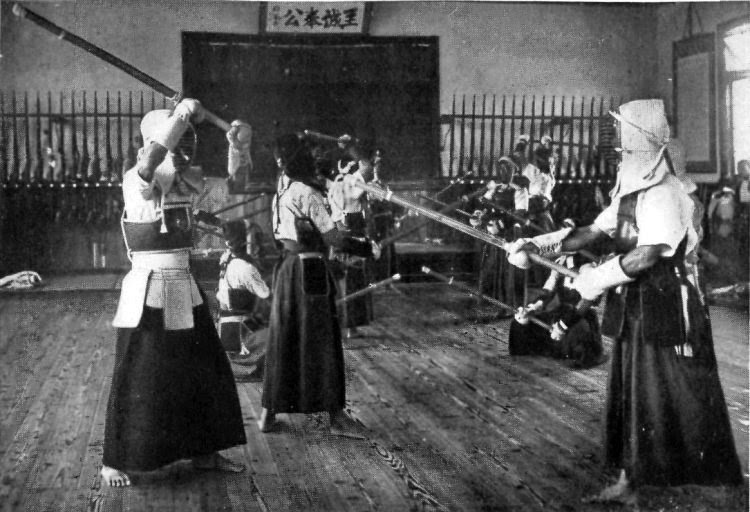 縁 is a very interesting word. It means a connection between people, fate, karma.

In Kendo it is used to describe:

"The relationship between a player and his/her opponent during keiko and a match. In kendo it is important to sustain and not to cut this relationship." (Japanese-English Dictionary of Kendo; All Japan Kendo Federation, 2000)


One example of how important this relationship is — in shiai (a match), the two shiaisha (competitors) approach the shiaijo (court) prior to the start of their match. The three shinpan (referees) stand silently in their positions, shinpanki (judging flags) by their sides.

Here's the important bit. A good shinpan team will not show any indication to the shiaisha of when to start.

They will not say anything.

They will not nod or wave their flags.

They will not make any kind of gesture or indication that the two shiaisha should start.

The shiaisha are expected to approach the shiaijo boundary line and form a connection, a relationship at that moment. The most straightforward way to do this is to make eye-contact.

When they have made that connection they will know when to both step into the shiaijo, then when to rei so that they do it at the same time. The shinpan remain just standing there.

What this shows, which is so important, is that the match is a matter between the two shiaisha, not between the shiaisha and the shinpan. The shinpan are just there to help things along. In a way it should be like they (the shinpan) are not there at all. This attitude comes from the days when the shiaisha were actual duellists with real swords, and the shinpan were know as tachiai or seconds; in other words, more like witnesses than referees.

It also reflects the ideal that shiaisha are honourable and will act within not just the letter of the rules but also the spirit of them. In former times there was no rule book, no match area and only one shinpan. This shinpan would rule on only one thing: whether a correct cut was scored or not. They were not involved in controlling the match and making sure it ran well. There were no lines on the floor to denote the match area and no timekeeper or time limit. The shiaisha were completely responsible for their own conduct. Having no written rules put the pressure on the competitors themselves to know all the rules and act accordingly.

Nagae sensei told me that the day they had to create a rule book for Kendo was the start of an endless process of writing more rules. What he meant was, once people start to rely on someone else to make them do the right thing, then more and more detailed rules are required to stop people trying to gain advantage from exploiting gaps in the rules. People start to play within the letter but not the spirit of the game.

To have a real relationship with your opponent is one way around this. It is not about you trying to outwit the rules, or the governing body for Kendo. It is just about you and your opponent. Not "cutting" this relationship means not doing damage to it—a strange concept in an artform with deadly intent but actually it is consistent with the highest ideals of the Bushi: to respect and honour one's enemy and not to hold human life as cheap. The matter of the duel is not one that involves personal feelings like rage or shame, but is simply a job that has to be done. Now that we are freed from actually killing our opponents, we have no excuses for not observing this ideal!

This ideal is very like the English concept of "sportsmanship". Unfortunately today this ideal only exists in amateur sport, and sometimes not even then. Many sportspeople forget that the referee or umpire is there to keep the game on track for the benefit of the players. They start to believe the umpire is the enemy, yelling abuse, lodging challenges. Sporting bodies like the AFL have to rewrite the rule book literally every year to keep the game on track as players and teams all try to gain advantage from gaps in the rules.

Here is a diagram I once saw that described the difference between sports and 武道 (martial ways) very well. Have a look at it and think about what it means. 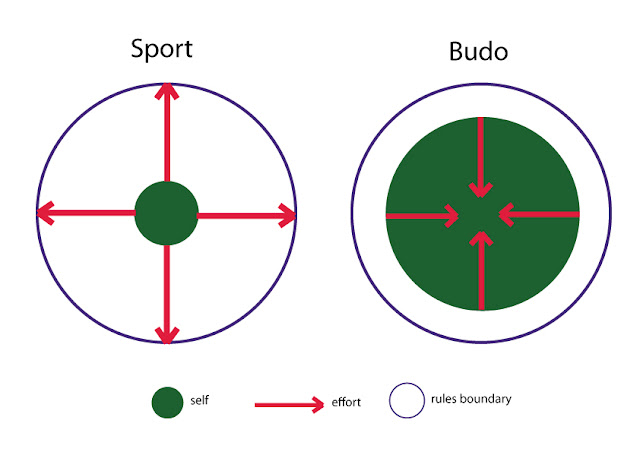 Thanks to Kevin for the chat that prompted this thought process.