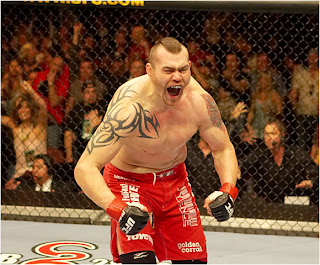 The Ultimate Fighting Championship  - more closely related to a mating ritual than to Budo.

When we think of fighting spirit, we often think of some kind of ferociousness. War faces, battle-cries, berserkers, mascots of angry power-animals, tattoos or war paint: all of these things are part of fighting a battle and the "crash or crash-through" frame of mind that soldiers and warriors have needed over the centuries.

However the ideal of Kendo is different. Kendo uses a different approach to battle, an attitude more like what the French call sang froid. Literally this means cool or cold-blooded, not having any personal feelings about battle but just getting the job done.

War-cries and war faces are related to the aggressive displays of male animals of many species during mating season. Kendo's mindset is more like the calculated stalking of the hunter: complete focus, no wasted energy, quick, decisive action, no celebration. How difficult this would have been in actual combat! It is hard to imagine. It would be easier to go crazy than stay calm!

So what do we mean when we talk about tokon, fighting spirit?

Fighting spirit is certainly a kind of intense feeling. It radiates some kind of strong impression, especially towards our opponent. It is also more than that. It is what you do, how far you are prepared to go. Fighting Spirit or Kantosho awards at competitions often go to kenshi of smaller stature, or kenshi who have persevered through particularly long and difficult matches. Never giving up can be said to be Fighting Spirit. This is not necessarily demonstrated via angry facial expressions.

What do we not mean by Fighting Spirit?

It is not tension in the body. It is not constant kiai. It is not anger at your opponent. These things make your movements slow, predictable and tiring.

Needless to say, it is not trash talk.

Act correctly and respectfully, and never give up. This is Fighting Spirit.
Labels: facial expression fighting spirit