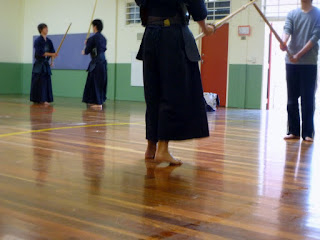 Kihon (基本) means the basic or fundamental practice of Kendo.  It is the ideal, perfect movement for each particular technique: the ideal men-uchi, kote-uchi, do-uchi, tsuki, suriage-men, etc, etc.

In Kendo we learn the fundamental way of doing things first. We don't say to people, "jump in, have a go and just see what the hell works." Kendo sensei are very careful to teach people what they see as the right way, which in the beginning is only one way. Later on as you get more experienced, you learn for yourself that there is more than one right way, but for beginners this is too confusing. So we stick to one correct way. Experience tells us that this is the fastest way to mastering Kendo.

But there are different levels of kihon practice. They range from practice by yourself, to practice against an attacking partner wearing armour with many stages in between.

All of these levels have slightly different roles to play and different levels of difficulty. What can be easily achieved in one will be more difficult in another. This article will look at the main ones.

The basic principle behind these different levels is that the more you have interference from outside, the more difficult and "real" the practice becomes, but also the further your practice moves from the ideal or perfect movement. All the different stages advance in difficulty. They presume the student has to some extent perfected the previous stage. So there is the sense of progress, or advancing through stages of difficulty.

However it is important to remember that the student, in order to really improve, needs to keep returning to the most basic stages of practice regularly. So progress here does not imply moving forward and doing away with the old. It is not a straight line of progression but more like a spiral: improving by returning to the beginning.

This is the most fundamental practice. Doing suburi, with nothing but the air interfering with your technique, you can concentrate on how your body moves with the shinai. You could even include "image training" here, where you are simply imagining yourself practicing. That would be the most ideal of all! It is not as silly as it sounds, and has been proven to be very helpful. But it is certainly the least "realistic" kind of training.

With suburi, the shinai and your own body provide some interference, some challenge so that your movement is not perfect. This is what helps you to research and refine what is the best way for your body.

Practice against a partner holding a shinai, or against an uchikomi-dai

This kind of practice introduces a new element, a solid target. This in turn means you have to now practice your distance or ma-ai. A partner will allow you a realistic follow through, whereas an uchikomi-dai (hitting dummy of some kind) usually forces your follow through to be a bit shortened.

Against a shinai the action of striking is pretty uncomplicated, as the target area is large and generally held flat. Different opponents will offer slightly different heights and distance, which also introduces some interference to your ideal movement and forces you to research and adapt. But this practice is still fairly easy and not that much different to solo suburi.

Practice against a partner wearing bogu

The next kind of kihon training is against someone wearing bogu. Whether you are wearing bogu as well also has a big impact.

If you are not wearing bogu, the action of striking a non-moving opponent wearing bogu introduces a new factor to your kihon, the importance of tenouchi. Knowing how hard to strike, how to make the strike 'stick' to the target area without sliding off, keeping correct hasuji (flight path and angle of blade), all these things become essential. It is now that beginners often find their men cuts are not landing properly, or that they cannot accurately strike the datotsubui (target area) of the kote or do. Problems with kote cuts include hitting the opponent's tsuba (sword guard) or hitting their kobushi (fist). Problems with do include cutting the front of the do instead of the side, cuts sliding off the do, cutting the tare, and not judging ma-ai properly leading to reaching forwards.

Tenouchi allows your cuts to stick. Correct orientation of the whole body, especially the feet, allows you to cut the actual target area and not just parts of the bogu near to the target area. Regular practice of the other, more basic forms of kihon allows you to be able to launch your cuts without hesitation or pausing at the top of the backswing, cutting in one movement (ichibyoshi), and with confidence your cuts will reach their target.

Practicing kihon against an opponent in bogu provides huge interference to your ability to perform fundamental movements, and so forces you to examine and hone what you have learned.

Beginners are placed in bogu progressively, which means in do and tare first. Then after some time in kote as well, then finally in men.

This seems to run against the wisdom of Occupational Health and Safety (OH&S) which would assume that beginners are more in need of all-over protection. Indeed, legal advice to the Victorian Kendo Renmei has suggested that in a hypothetical damages claim for an injury sustained by a beginner in normal training, a judge would be unable to be convinced of any reason why a beginner should not wear full bogu from the first day, and therefore would find against the defendant (the Kendo instructor or association) in this instance.

However the prevailing wisdom from the point of view of Kendo instruction is that full bogu presents too much interference with the learning of basic, correct movement, in other words, kihon. Therefore do and tare are worn first because they present the least interference, adding only weight to the student's body but not hampering their movement. They also allow the beginner for the first time to receive cuts to the body and be struck on the do.

Next, the wearing of kote challenges the student's ability to handle the shinai properly and to keep a straight and accurate hasuji.

Finally, wearing men deprives the student of much of their peripheral vision and hearing, adds weight to the head which affects balance of the whole body, and finally may also be uncomfortable, hot or even claustrophobia-inducing. It is the ultimate test of a beginning student's grasp of kihon. Indeed the extent to which a student regresses after wearing men can usually be a measure of the steadiness of their training to that point. Those who are well-prepared through sufficient practice regress least.

So all of the 'interferences' of the preceding stages return with a vengeance, made worse by the disorientation provided by wearing the men. The good news is that in the majority of cases, this disorientation is temporary. Usually only a couple of training sessions. For any student who has more prolonged trouble, I would suggest their instructor needs to look at other factors: lack of preparation, a physical or psychological problem, or perhaps ill-fitting bogu.

Practice against a moving opponent

This is getting close to true ji-geiko (free sparring) in difficulty. A moving opponent might be a motodachi for uchikomigeiko showing the opening for basic cuts, or may be performing a simple attack so that the student can perform a counter-attacking technique (oji-waza).

A moving opponent in bogu closes off the opportunities for easy success in judging distance and accuracy. Opportunities are by definition momentary. They come and they go. The student has to begin to read his/her opponent's body movement and rhythm. Even in drills such as uchkomigeiko, where the motodachi's aim is to lead the student to success, the timing of the cut (hyoshi) becomes a factor. Practice against different opponents always presents new difficulties even when doing the one sequence of cuts, as all people move differently and have different body geometries.

This article has looked at the natural progression of difficulty in the practice of kihon, or fundamental techniques in Kendo. It has tried to show the logic behind this progression, both for the student and for the teacher of Kendo. The important thing to learn from this 'logic' is that one should try and always keep the feeling of the most ideal practice, even when in the midst of the most difficult and 'real' situations.
Labels: kihon realism in training solo training