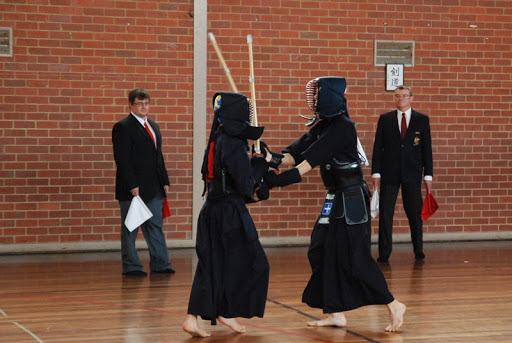 In kendo, hiki waza are techniques performed going backwards. Usually they are performed from the position called tsubazeriai.

Hiki waza must be performed when you are at a distance that is too close to be able to cut with the monouchi (top one third) of the shinai's blade. Usually this means when you are close enough for your kote and your opponent's kote to touch.
Hiki waza cannot be performed if you have moved forward towards your opponent in order to close distance and attack. In other words you can't run in, attack and run back out again. If you run in, you follow through forward. If you are already in, you may cut and retreat.
Basic pointers on how to perform hiki waza
Hiki waza should be performed with a single step backwards. This step can either be a fumikomiashi (stamping step) or suriashi (sliding step). Beginners in particular should start by using suriashi. Experienced kendoka who are having trouble with correct striking distance should return to using suriashi as well, so as to fix their retreating movement.
Ideally, hiki waza should be performed with as straight a posture as possible. This helps with accuracy of the cut, especially for hiki-kote, and with overall body timing and movement (that is, getting everything to happen at once) and zanshin (following through).
Zanshin is performed moving backwards, away from the opponent. As with kihon waza, you should keep the finishing position of the cut after hiki waza as you retreat. Then at a safe difference return to chudan no kamae. The one exception to this is where, after a small, fast hiki men, it is acceptable to lift the sword into a furikaburi position. This is where the sword is held straight up above the head at a 45 degree angle.
Seme for hiki waza
Like all techniques in kendo, opportunities don't just happen, you need to create them, using seme.
Seme for hiki waza is created using both your hands and the movement of your body while still in tsubazeriai. This is a situation in kendo where circular movements become as important as straight ones.
To create an opening from tsubazeriai you need to combine both the pressure of your hands on your opponent's hands as well as the rotation of your body from the hips to create a new chushin (centre-line). Prior to attempting hiki-waza, try to brush aside your opponent's sword by controlling their hands. You can also push down to induce a counter-movement, e.g. push down on their hands, when you release their hands will naturally spring up a little showing an opening for hiki-do.
In fact there is almost as much variety in these shikake (attacking) openings for hiki waza as there are for kihon waza going forwards.
As Musashi might say, you should practice this well!
Labels: hiki waza

Anonymous said…
Sadly, where I come from, Hiki waza are similar to Tsuki: You basically never practice them but when you hit 2nd or 3rd dan everyone expects you to be able to do it.
Then again, someone once told me, in his 30 years of shiai experience, he got ippon from hiki waza exactly twice.
March 2, 2011 at 12:15 AM

Nanseikan said…
That's surprising. Usually hiki waza is practiced quite widely in junior and intermediate grades. It is not nearly as problematic as tsuki for those with less experience.

I've also seen many, many ippon in shiai awarded to hiki waza.

OTOH when you get to 5 dan and above, it is strongly advised that you never use hiki waza in gradings.

Personally I think hiki waza are interesting and very valuable to have as part of your training, but they are not the main part of kendo a shouldn't be emphasised. b