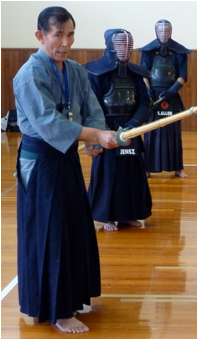 To avoid excessive lever action being applied during suburi, start practice with hands together on the tsuka near the tsuba.

Then repeat this sequence of suburi styles with hands in normal position on tsuka.

1. Start by practicing cutting men with no follow through. Stop at fumikomi. This practices balance and posture.

2. Then change to cutting and following through to tsubazeriai but no taiatari, just come to a point of touching opponent’s kote in tsubazeriai. After 3 times, on the last time follow through as normal.

3. Next, cut men and follow through but opponent retreats, remaining in front of you. The opponent then does the technique. One for one. “Endless!”

4. Next is men and coming in to taiatari. Practice one for one also. “We must remember to do these step-by-step…” (increasing in difficulty with each drill, the last one the hardest).

TIP
After cutting kote come to taiatari, but be sure to bring shinai back to omote (right) side of opponent’s shinai when in tsubazeriai. This allows you to keep your hips straight on to your opponent, and allows you to effectively control their shinai.

Repeat steps 1–4 with do. Think of do as being up-down, same as men and kote, not up and around-and-down.

Perform kirikaeshi to this patterm with no follow through.

Do sequence in one breath.

Try increasing to 7 x sayumen in one breath

This sequence of drills looks at seme and it’s application to shikake waza (attacking waza).
1. From to-ma, close distance to your issoku itto no maai (IIM). Then from there, seme.

2. Seme with either you head or your front foot in order to create a change in your opponent’s mind and posture.

3. Then attack with the whole body: sutemi 捨て身 (“sacrifice everything”) .

This is the basic practice of seme. It is an ideal situation, not the reality of a match.

2. one side does hiki waza – either hiki men, kote or do, whichever they prefer.

3. Then both sides come back into IIM, look for the opportunity, and attack.

The important aspect of this exercise is to continue kiai all the way from the hikiwaza through the final technique. “Don’t cut your spirit!”

(NOTE: This exercise was quite tricky for many people because it appears that one person is the motodachi but in fact both are participating equally. Steps (1) and (2) are simply a way of creating a higher level of anticipation and energy prior to the actual seme exercise. In particular it is important for the two kendoka to examine the difference in the intensity of their preparation before the cut, whether they are the one who has done the hiki waza or the other one who has not. The one who has done the hiki waza should have a slight edge in terms of their preparation and energy level, which their opponent must be careful either to match or exploit in some way).

For the first set of this hikiwaza based exercise, the final attack should be just men.

For the second set, use any target.

Fourth set should finish with a perfect* attack.

Next, the whole sequence can be repeated starting with both sides striking kote instead (ai-gote).


*Sumi sensei means that after starting with the most simple variation, then building up to very complex ones, to come back to executing an ideal waza, but one which now has a greater intensity and realism as a result of the dynamic drills completed just prior. This is a basic principle of his teaching method.

This sequence of drills looks at seme and ojiwaza (counter-attacking waza).

1. perform hiki waza of your choice

2. offer men to your opponent (should include a small seme step in)

3. counter attack with oji waza of your choice

“Hiki waza. Stop. And then invite—step in, and keep balance!”

Second variation, repeat steps (1) to (3) but offer kote instead and counter to kote.

These oji waza drills starting with hiki waza work on the same principle as the previous seme drills focusing on shikake waza: to examine the way that intensity, preparation and initiative vary between opponents according to the situation. Always starting drills from a static position allows you to train only an ideal kind of waza, whereas a more dynamic starting point allows you to train for not only more realism but also how to capitalise on, or neutralise the ascendancy


When receiving, block only one or two of opponent’s cuts randomly. If opponent does not strike your men properly, they must repeat the sequence. 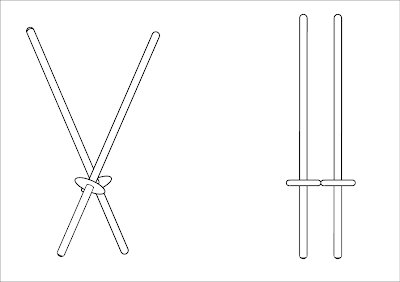 Not this way…
Performed correctly, tsubazeriai allows you to stifle attacks on both omote and ura sides of your shinai.

Sumi sensei led the team that devised the Bokuto ni yoru kihon waza keiko ho, or “Sequence for practicing basic technique via use of the wooden sword”. Sumi sensei calls this “Bokuto kihon” for short. The basic nine kata should be familiar to most by now.

While this exercise is usually done without bogu and using the bokuto it can also be practiced with the shinai and using full bogu. In this case, full contact is made when performing the exercises, including tsuki.

For kihon ichi, take care to observe that each cut has a different starting distance. 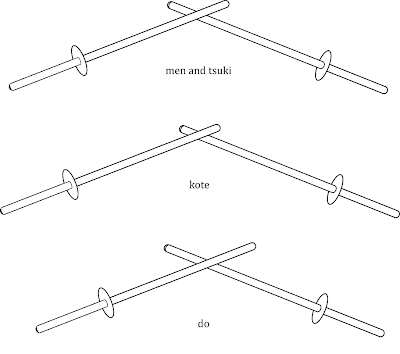 You must be careful to come to the correct distance for the next technique of kihon ichi when finishing the previous one.

Motodachi receives kote but lifting their kensen straight up.

"Fast backswing is important for a correct cut.
A fast backswing leads to completing a cut in a single movement ('ichibyoshi')"

When receiving kihon ni, ni-san dan no waza (kote-men), motodachi receives kote lifting straight up, then steps back and pushes kensen down to point at four o’clock so as to receive men on the omote side. Motodachi should have a brisk rhythm, not

Motodachi, when receiving kihon san, harai waza: after crossing swords and making ‘mind contact’, then looses power in their kamae so harai can take place. Harai-men should be one action not two.
Kihon yon, nuki do: the footwork for the nuki do is not just sideways but diagonally forwards. Backswing for the cut only needs to be in front of your own face (not above your head), then the feeling is cutting forward, with a feeling of “throwing off” or casting the kensen forwards.

Kihon go, hiki do: kakarite strikes men, motodachi blocks (similar to kirikaeshi), then both step into tsubazeriai (see diagram above). Kakarite pushes down on motodachi’s tsuba and then cuts do.

Kihon hachi, kaeshi do: important to consider that kaeshi is not blocking but that kaeshi and cut are a single movement.

Kihon kyu, uchiotoshi do: kakarite must use feet to change direction of hips when receiving motodachi’s do attack.


You can also do Bokuto Kihon as uchikomigeiko. Use continuous kiai and suriashi, (but no follow through).

Jigeiko contains many different forms of practice. When doing jigeiko against motodachi for instance, jigeiko should start as gokakugeiko, or practice between equals. This means the motodachi fights the student with complete intensity and both try to find the opening by unbalancing their opponent.

After a short time, the motodachi will change the training to either hikitate-geiko (training where they try and draw the best techniques from the student) or kakarigeiko (repetitive attacking practice).


These notes are an incomplete record of the day’s instruction. Any errors or omissions are my own. b