Why is kendo called kendo?

image (c) Miyako Budogu
刀 means sword. This character is also pronounced katana.
This is a ken 剣. It's a Chinese sword. 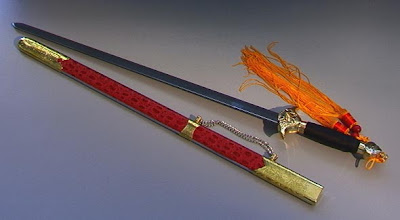 This kind of sword is used in Tai Chi Chuan.
You can see that it's a straight sword and that its handle is only big enough for one hand. It is also double-edged, not single-edged like a katana. Not very much like the swords we use is it?
So why are we learning kendo 剣道 and not todo 刀道?
Well as far as I can work out, there are two main reasons.

In English, if we want to refer to something in general, we can say "a sword". However if we want to talk about something specific, we can say "the sword". Japanese does not have "a" and "the" like English does. We say "Do you own a sword?" and "Yes, the sword over there is my sword." In Japanese you would say, "Sword have?" and the answer would be "Over there's sword is", or more simply, "Hai."

This is all well and good if talking about concrete objects: actual swords. But what if you want to talk about the epitome of all swords, an abstract, ideal or conceptual sword? In English we solve this by using capital letters. We talk about the swords we use in kendo, and then we talk about The Way of the Sword. Notice how both "Way" and "Sword" have a capital letter. This means we are talking about not just any old way, not just any old sword. Japanese does not have any capital letters so they have to find another way to talk about the 'mother of all swords', if I can put it like that!
China's is a much older culture than Japan's, and China gave Japan so much: writing, tea, Buddhism, etc, etc, etc. The Japanese therefore feel deep down that China is, in many ways, the source of things. This is much the same as how European cultures think of Ancient Greece and Ancient Rome. When people want to describe something almost beyond words in English, they might use Latin or Greek to explain it.

So the Japanese refer to a sword that came from China, a very old design, maybe older than Japan itself: something from the mists of time, almost magical. 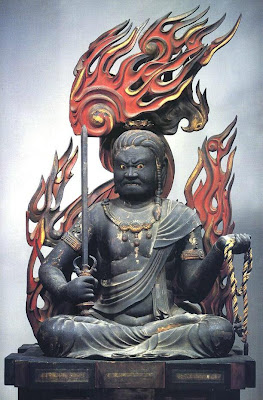 Most Japanese would think of this fellow when they think of someone wielding a ken.
His name is Fudo Myo-o and he is one of the Buddhist protector deities.
His ken is used not used to kill things, since he is a Buddhist, but rather to "cut off delusive thoughts"
which means thoughts that are silly or a waste of time.
A to/katana is something you use in battle, a real thing you can hold in your hand. But to the Japanese, a ken is an idea, a myth, something that exists only in the mind. This is perhaps why we call the Way of the Sword kendo, and not todo. Ken is how you say "the Sword" with a capital "S", in Japanese.
So to recap: 刀 is a sword.

This is one reason.

The other reason is much briefer and I came across it today in a new book. At the end of the book the author, Mr Toshinobu Sakai, says that with the double-edged sword:

"One blade edge points towards the enemy, and the other edge always at the internal Self."

By that he means that the ken reminds us that the sword has a dual purpose: we must try and defeat our opponent, but we should also try and improve ourselves, always. b
Labels: katana ken