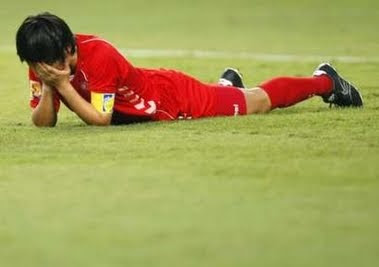 Being defeated, being beaten by an opponent, is one of the hardest things to deal with in kendo*. Sometimes, when we have tried really hard and we still get beaten, it makes us want to give up kendo. Some people do.

It is because it is so difficult to bear that being defeated has the most to teach us about our kendo, and also about ourselves. Someone who has learned to come back from defeat in kendo will be able to deal better with hardship outside of kendo, because they know defeat is only temporary. They also know that today's defeat contains the seeds of tomorrow's victory.

As a result, being defeated becomes a precious and valuable experience because it shows us our weak points. If we are humble and dedicated, we can use that knowledge to develop our weak points so that they become our strengths. This is how we improve as kendoka. This is why there is a saying in kendo, "When you are defeated, give thanks." Your opponent has just shown you what you need to know to win next time.

But it still hurts...
Then think about this:
The Shinkage Ryu was developed from the Kage Ryu by Kamiizumi Ise no Kami.

Yagyu Sekishusai was already an experienced samurai when he first met Kamiizumi. Sekishusai had first led troops into battle when he was only 15 years old, and many times since then he had been singled out for praise for his bravery in war. This was the Sengoku Jidai or 'Warring States Period' in Japanese history, when the many small domains that made up Japan were constantly fighting each other. In other words, Sekishusai knew what real fighting was and he was pretty good at it, good enough to survive.
In 1564 the Shinkage Ryu founder and some of his students were in the area where the Yagyu family lived. It appears that Kamiizumi asked around as to who in the area was a worthy swordsman. Sekishusai's name came up and so a match was arranged. History is sketchy about whether it was Kamiizumi himself who fought Sekishusai. More likely it was one of his senior students (perhaps Hikita Bungoro, another famous name in Japanese swordsmanship). Whoever it was, the outcome was the same—Yagyu Sekishusai was soundly beaten.
Even though he was already a successful and highly-respected samurai commander, Sekishusai's response was to become Kamiizumi's disciple**. It was this decision that put Sekishusai, and his entire family, on the road to greatness. He studied Shinkage Ryu under Kamiizumi intensely until he finally received the seal of full transmission of the school from Kamiizumi. Yagyu Shinkage Ryu went on to become the personal school of the Tokugawa family, after Tokugawa Ieyasu became the first Shogun, or Supreme Military Ruler of Japan. Many of the most important philosophical ideas in Japanese swordsmanship come from the Yagyu Shinkage Ryu. And the school still exists today, still headed by the Yagyu family.

All thanks to Sekishusai swallowing his pride and begging Kamiizumi to teach him everything he knew.

"If this person can defeat me, then I want to know what s/he knows."
This is not the thinking of a wishy-washy person or a weak person. It is the thinking of a humble person, someone whose drive to be better is bigger than their ego. A great person doesn't just stick to their guns, they know when they have seen something extraordinary and then quickly grasp the opportunity.

*It's also one of the great things about kendo. When someone beats you there is no arguing. It's clear. You have to deal with it. No half-points. No variation in rules from one dojo to the next. Some martial arts do not give you this kind of clear feedback, and I personally believe this is why these martial arts sometimes end up with people at the top who are very egotistical and yet who never allow themselves to be challenged by their students. In kendo two things keep us honest: sweat and yuko datotsu (successful scoring cuts).

**What is the difference between a student and a disciple (弟子 deshi in Japanese)? A student may study hard, but their life is otherwise pretty normal. A disciple is someone who is willing to give up everything (family, friends, possessions) if necessary so as to follow a particular path or a particular teacher.
Labels: defeat

prom said…
Thank you for this article. I was defeated badly today. I felt depressed, because I have been trying so hard. But after reading this article, I understand true meaning behind losing. I will keep practicing to become better Kendoka. Again, thank you for this inspiring article.
October 22, 2009 at 3:28 AM

Anonymous said…
If the aim of kendo is to develop character and be a better person, we must ask ourselves what we mean as "victory".
A revered sensei tell us once that to do our best is to win...
I like this point of view, consequently in a tournament with 200 kenshi partecipating, all of them can win at the same time (or loose if you see the reverse of the medal) not only one...