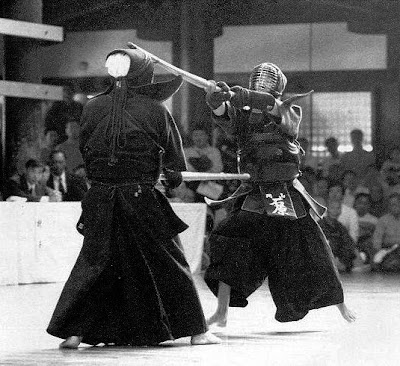 Ishihara sensei (Hanshi 9-dan) from Okayama Prefecture finds a beautiful opening for men against his opponent
(from the 9-dan competition, Kyoto Taikai).
Continuing on from the previous post on strategy, the other main area of waza is shikake waza or techniques that you initiate: in other words, attacking techniques.

The most basic shikake waza involve just cutting when you perceive an opening (suki) in your opponent's kamae. An opening is when your opponent is no longer aiming their kensen (sword-point) directly at your throat. This includes basic men and kote (but not usually do, due to the fact that it is nearly always covered by the arms except when executing a cut).

Shikake waza
However openings will often require some effort from you to create them. There are a variety of ways to achieve this. These are:
* note that when each waza is named, only the waza and then the target area are named, which differs from oji waza where the opponent's waza is listed first. Of course with shikake waza, there is no technique coming from your opponent to begin with.

The secret with all shikake waza is make sure the waza and the cut that follows it are a single technique. Don't just move into your opponent's ma'ai (that is, move in closer than issoku-itto-no-maai) without having a technique ready. And don't create an opening without moving in to capitalise on it (in other words, cutting).

Sometimes during training I use the analogy that performing shikake waza such as harai waza is like opening a spring-loaded door: you can't just push the door open and then stand there or the door will close on you. You must open the door and then straight away walk through it. It is the same with shikake waza: create the opening in your opponent's kamae and then immediately make use of it.

In fact with most shikake waza, your technique will not be successful if you are not moving towards your opponent as you are performing the technique. Do not wait to see whether your opening has been successful before launching an attack. For instance with harai-men, you should be moving towards your opponent as you sweep their shinai aside: sweep and cut in one smooth motion.

Application of various shikake waza
As with oji waza, there are some basic rules about when a certain waza is most appropriate. Knowing these basic rules is important in order for you to develop your own sense of strategy.
Feeling out your opponent's tenouchi
Above I mentioned that makiotoshi is best against someone whose tenouchi or grip on their shinai is firm. What does that mean and how can you work that out?

You can feel with your own shinai whether your opponent's tenouchi is firm or soft. Do they try and keep their shinai stuck to yours when in issoku itto no maai? Or is it easy for you to move their shinai with sharp slaps from your own?

When facing your opponent with shinai crossed, you should take note of how your opponent is holding his or her shinai by how it responds to your own.

Applying shikake waza against firm and soft tenouchi
Just as certain waza work best against certain height of chudan no kamae, so they also work best against various degrees of firmness or softness in your opponent's tenouchi.
Against very firm tenouchi
Perhaps your opponent has a very firm tenouchi. They may have realised that you are feeling them out in order to apply some shikake waza and so they have made their grip very firm, making it impossible to apply harai, makiotoshi, etc.

In this case you can use their tension against them. Here are some scenarios that may work for you. You can also experiment with discovering your own.
Sutemi
Sutemi (pronounced s'temi) is written in Japanese with the two characters "to throw away, to discard", and "body". It means to sacrifice, in this case, yourself, your whole body. In kendo it is almost impossible to score yuko datotsu (all the requirements for a winning point) without this sutemi. In the early stages of learning kendo, this "throwing away" must be practiced carefully and deliberately. It takes a while to realise exactly what really giving 100% effort feels like. Later it becomes second nature. Experienced kendoka, especially shinpan (match judges) are expert at seeing it and know just by looking if it is present in your kendo.

Sutemi means putting 100% into your attack, not holding anything back. It also means showing confidence, believing in yourself, not hesitating. It also means not caring about whether your attack is successful or not, whether your opponent cuts you or not, but caring only about doing your VERY best.
"This is the last act I will ever undertake in this life. I cannot guarantee its success. But I can guarantee that I will do my absolute best, giving everything I have. Because of this I can die with no regrets", this is how the samurai used to prepare for their duels with real swords, and it is the essence of what sutemi means. Of course we no longer need to be prepared to die in kendo! But the feeling that every time you do something you are showing your absolute best is still possible. Understanding and developing sutemi is one of the most important goals for your kendo in the first years of training.

In relation to shikake waza, sutemi will help you break through after the intial waza creates the opening. Sutemi will mean you do not hesitate even for a nanosecond to make use of the opening you have made and crush your opponent. It will mean that you score cuts where previously you were unable to.
Labels: kendo theory shikake waza strategy