The lecture is made up of six sections:
1 History of kendo
2 Characteristics of kendo
3 Value of kendo
4 Effect of doing kendo
5 Concept of kendo
6 Attitude of instructor*

If I start to feel tired I will simply stop the lecture early. [Note: * In fact this section was omitted due to the lecture running almost an hour over time.–BS] In the All Japan Kendo Renmei, lectures of this sort are attended standing. Those in the audience are not permitted to sit! However I will let you all sit today!

1) History
Kendo is a unique product of Japanese culture. The first origins of kendo were for the purpose of hunting and killing animals for food. Much later the Warring States Period (Sengoku Jidai 戦国時代) led to swords being used for political purposes. From this, swords, spears, the staff, etc, were developed with a view to killing other human beings.

Later, during the Tokugawa Period (徳川時代) the concept of bushido (武士道) was developed. The sword was no longer used for war but schools developed for their use, based on killing. At one point there were between 400 and 500 different schools (ryuha 流派) dedicated to swordsmanship and related arts in Japan.

Kendo developed from many of these schools, such as the Itto Ryu (一刀流), the Yagyu Shinkage Ryu (柳生新影流), the Ono-ha Itto Ryu (小野派一刀流 ) and so on. Tokugawa Ieyasu chose the Yagyu Ryu because the emphasis was not on the killing aspect of swordsmanship, but on the spiritual or human development aspect.

So the sword for killing people became the sword to develop life, or people’s life. The Tokugawa clan ruled peacefully for 300 years, largely due to this concept of katsujinken. Today’s kendo continues this tradition, where the point is not strength or conquering others. It is to develop people and human society.

The purpose of kendo practice is to improve your techniques, your mind and your physical fitness. Things learned in the dojo you can use to benefit society.

4) Value of kendo
Artistic nature of kendo. Beauty is very important in kendo and it is this aspect that is closely linked to etiquette. Yesterday I showed you how important it is to take off your men neatly, placing your men himo carefully on the floor next to your men. This is an expression of your awareness of beauty. Actually, etiquette is nothing more than the appreciation of beauty in everyday actions: for instance not loudly blowing your nose opposite someone at the dinner table but first removing yourself and doing it away from view is an appreciation of beauty, and at the same time an appreciation of the feelings of others.

Martial nature of kendo. This aspect was discussed above in regards to the history of kendo.
Educational aspect of kendo. Kendo’s aim is to develop people who can contribute to society.
The competitive nature of kendo. (As an aside, Fujii sensei said he was dismayed at how many instructors were teaching their kendo students only techniques useful for winning, and neglecting the other aspects above, especially the importance of beauty and etiquette).

5) Concept of kendo
In the year Showa 50 (1975), the All Japan Kendo Federation published the Concept of Kendo (剣道の理念 Kendo no rinen)
“The concept of kendo is to discipline the human character via the application of the principles of the sword.”

The All Japan Kendo Federation (全日本剣道連盟) badge is based on the circle, with three partial circles of different colours contained. The three colours are red, blue and white: red=knowledge (chi 智), blue=sympathy (jin 仁) and white=courage (yu勇). Courage is this case represents courage against evil.

礼に始まる、礼に終わる rei ni hajimaru, rei ni owaru
In kendo we say “Kendo begins and ends with courtesy.” This means that manners are most important. A kendoka should not be proud of victory, not disappointed in defeat. Self-control (kokki 克己) is important. Respecting others is also important.
Eventually the spirit of budo links to developing the human being.

Seme
I would now like to talk about the specific aspect of attacking known as seme
(攻め).
First of all there are two concepts that relate to the completion of an attack: shin ki ryoku itchi (心気力一致) and ki ken tai itchi (気剣体一致)
Shinkiryokuitchi describes the necessary condition of readiness in order to make a successful attack, that is, that your intention, your energy and your physical power are all in accord.

Kikentaiitchi refers to the action of making the cut, whereby all aspects of the cut come together as one, that is the shout, the sword and the footwork or body movement. 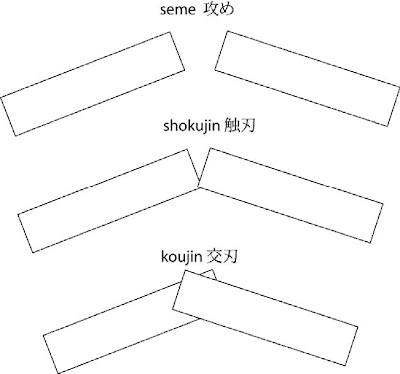 There are many kinds of seme leading to the cut. My teacher was Sugawara Keisaburo. His motto was:

This means you should win the point first, using seme, then follow through with a cut once you have already defeated your opponent. But what is seme? How do you use it?

What does “seme against your opponent’s waza” mean? It means to get in first. Don’t let them express their technique. Debana waza is an example of this. see fig. 2 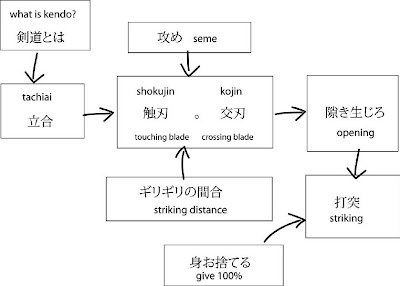 In kendo there are what we call the four sicknesses: fear, doubt, surprise and captivation 驚懼疑惑 (kyo ku gi waku). When you see any one of these in your opponent, you strike. When the opening is there, you give 100%. Don’t hold anything back, or think about what your opponent might do as a counterattack. Just put everything into your attack. Also, we train to eradicate these sicknesses from our kendo. Yesterday when I was doing jigeiko against one of the other Hokudai sensei, he showed seme towards my kote and in response I raised my shinai. This I considered a losing point, even though yuko datotsu did not actually occur. Just the fact that my opponent was able to arouse one of the four sicknesses in me was enough. This is the reason that I train with a shorter than normal shinai. When I have trouble with my mind, I use a very short shinai [shorter than a size 34 shinai—BS]. With a very short shinai, I must have a strong centre and mind in order to overcome the disadvantage of the short shinai. This is the way I have developed to help me train my mind.

When using the shorter shinai however, it is like using the kodachi (小太刀). A slightly higher kamae can make up the difference in length, so that there is almost no difference in maai. see fig. 3 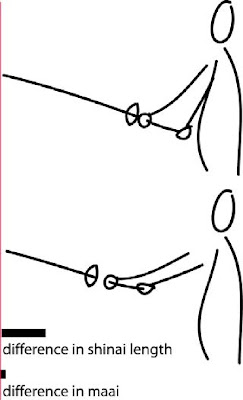 In Japanese it is said that “bad technique comes from a loose armpit”, meaning a gap between the arm and body.

Kensen movements should always be subtle. Don’t show your eagerness to attack. Don’t be greedy to get the point. On the other hand, the character mu 無 on my tenugui does not mean “do nothing”. It means don’t have an idea in your mind to do something.

6) Breathing technique
Breathing is important in kendo. Of course. If you stop breathing you die! So we do it all day and all night. But would you like to know how to increase your tanryoku through breathing? It’s very simple and you can practice anywhere. Put one hand on your tanden 丹田, which is the lower part of your abdomen, about 2 inches below your navel. Breathe in quickly and fill your lungs. Now breathe out as slow as you can, feeling your hand move. Practice to increase the length of time you can spend breathing out. In kendo breathing is linked to the moment of attack. It is very hard, perhaps impossible to attack while breathing in. In fact the moment of breathing in is an opening to attack. In Japanese we call the in-breath kyo 虚 (falsehood) and the out-breath jitsu 実 (truth). The outward breath creates strength and has no weakness. The inward breath creates 隙 (suki) or weakness.

Conclusion
The important thing in kendo is to take sen 線 (the line).
Kendo is not to exercise technique.
Kendo is not to strike.
Kendo is not to wait.
I read recently that someone said “kendo is eyelashes.” I thought about this for a long time. In the end I came to the conclusion that he meant that it is something that is right in front of you, but you can’t see it.

We have gone over time. I was going to say something about the role of the instructor but I find it is not necessary because you have Nagae sensei. In Japan these things I have told you are not talked about. They are not sharedwidely. But I am just a fool. I tell you all everything!

Thank you very much!

This transcript is based on notes made by me during this lecture. It is not meant as comprehensive translation of Fujii sensei’s lecture. It is merely meant to serve as a reminder for those who were there, and an ‘informative taste’ for those who weren’t. These notes were made after the simultaneous translation into English by Yano Yoichi sensei. Any mistakes are mine. Any corrections or additions from others who were there are welcome.
Ben Sheppard, Melbourne 2006.
Labels: Fujii sensei lecture kendo history kendo theory

Rambling Mind said…
Thank you very much for sharing the lecture. It is extremely insightful and has given me much to think about.
August 7, 2008 at 1:23 AM