Why would a Kendo club buy a real sword to use? 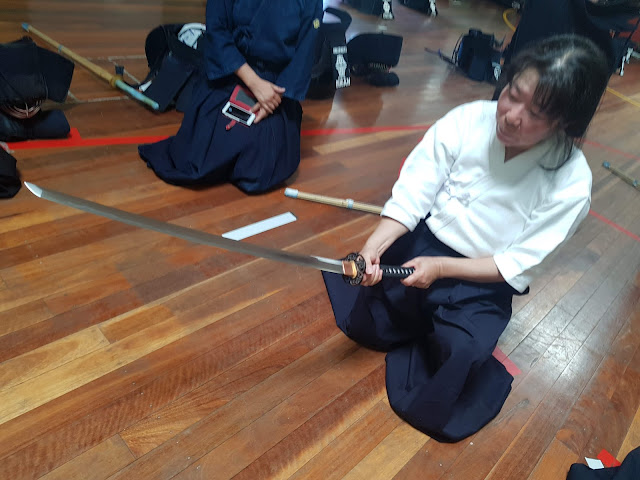 The sword comes to training for the first time.

Last year we embarked on a project to purchase a real sword for the club to own and use. One of the senior members of the club is a collector of Japanese swords and related militaria and he has a real eye for quality, so I was confident he would find something appropriate. We decided that we wanted a sword that was properly forged and in good polish (i.e. sharp!) but not so expensive or valuable that we would be afraid to use it for test cutting.

Below I will describe in detail the process of acquiring the sword, and then the rationale for having it.

After only a few weeks of searching online a blade was found that seemed to fit the bill. It was a properly forged katana with no name (mumei) dating to the early Showa period (1930s). The temper pattern (hamon) showed care and skill but it was not overly decorative, meaning this was a sword made to be used. One theory about its provenance is that it was part of a large order of swords from the Japanese Government to the swordsmiths of Gifu Prefecture, before they shifted to factory manufacturing processes in the lead up to WWII. However being a mumei sword I'm afraid we will never know for sure the sword's history. 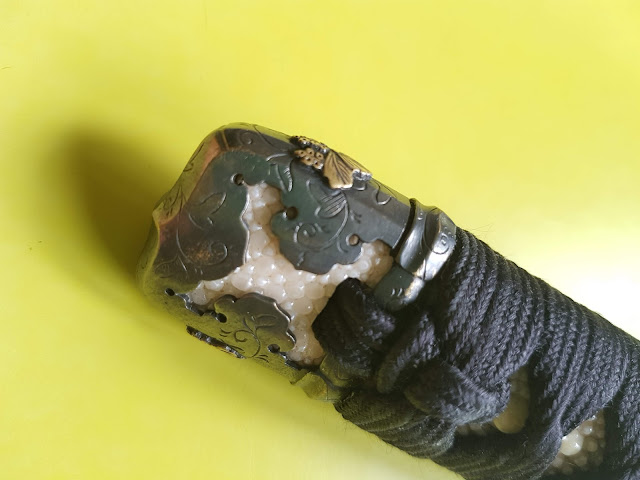 the kashira or pommel-cap; you can see the white same or rayskin underneath, and how the silk tsuka-maki or handle-wrapping is knotted off at the end

The only problem was that it was a bare blade. After some further hunting around online our resident sword-expert found a guy in the States (where the blade was) who was a skilled amateur in making sword fittings (koshirae): the handle (tsuka) and scabbard (saya). This seemed like a promising avenue because he would be keen to do a good job but because he was still improving in skill his prices would not be through-the-roof. 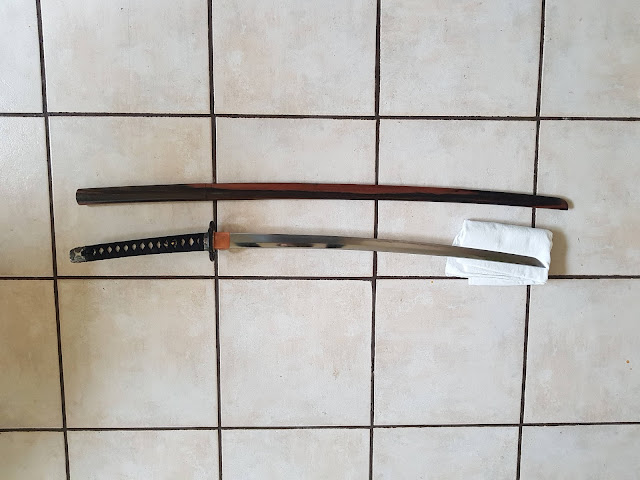 the sword next to a standard-sized bokuto

The other things that were needed were all the small parts: the menuki (small figurines that lie embedded in the handle to aid grip), habaki (sword-collar), kashira (pommel), fuchi (handle collar) and tsuba (guard). These things had to be sourced separately and then shipped to the koshirae-maker for use in the final assembly. These parts are designed after auspicious animals or objects, and a sword would use specific themes or motifs that showed something about the owner's personality, beliefs or family. Typically for instance, the menuki, fuchi and kashira usually share the same motif. A tsuba may have a different motif but there might be a hidden meaning in the choice of theme overall. 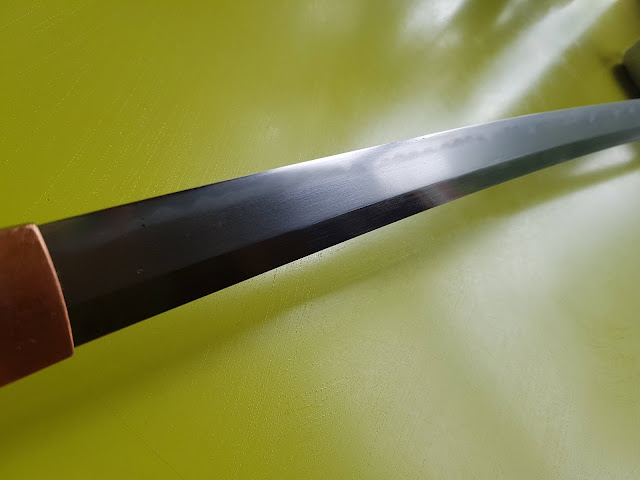 if you click on this image you can see the grain of the folded steel that proves this was a properly forged sword; you might also see along the seemingly unevenly wavy hamon or temper-line a repetition of three bumps, said to represent three cedars trees sitting above the line of the forest canopy

After some discussion it was decided that a theme of phoenixes (phoenices?) would serve as good motif for the decorative parts of the tsuka. The fuchi and kashira were modern reproductions, albeit of very good quality. However the menuki were Meiji era (100+ years old) originals with actual gold detailing. Really special! 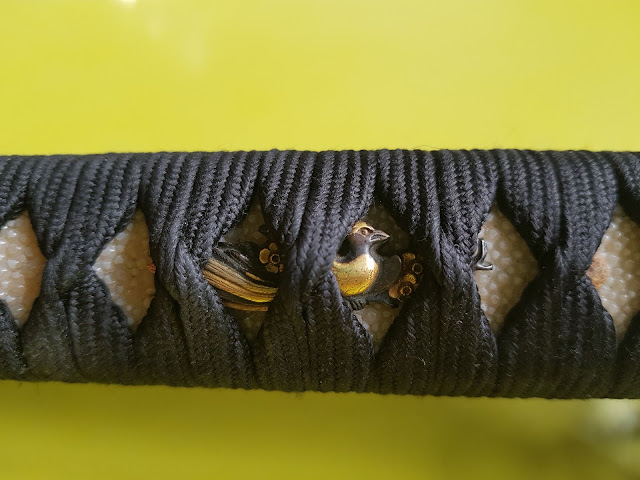 Because the style of swordsmanship that I know is the Tatsumi Ryu of Chiba Prefecture, we tried to find an emblem related to the school in some way. It proved difficult to find anything specifically 'Tatsumi-esque' so instead I looked towards the ruling clan whose bushi (warriors) were drilled in Tatsumi Ryu Hyoho. the Hotta family kamon: a design based on the boke or Japanese quince

The Hotta Clan (堀田氏) certainly did have an emblem or kamon, and by some luck, our researcher was able to locate a tsuba that was based on the this family emblem! The tsuba was not overly expensive because it is a cast iron reproduction. 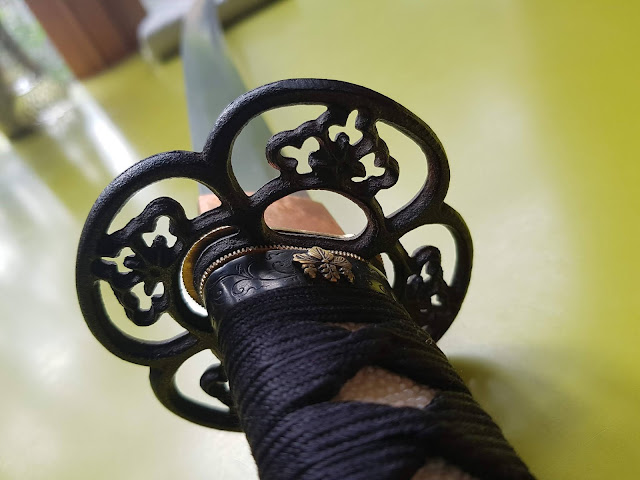 the tsuba; on this side you can see the fuchi and one of the serrated seppa or washers, on the other side the copper habaki

You might not want to go into battle with a tsuba that was not forged, but for our purposes it was perfect. It fitted the theme but didn't blow the budget. Even better, the weight of the tsuba turned out to suit the blade very well. This was something that we only found out when the finished sword was delivered complete.

The tsuka-maki or handle-wrapping is tight. From experience I know that only time will tell exactly how tight and well wrapped it is. But I am confident the artisan who did the job was proud enough of his workmanship to do what was required that we should never have a need to send it back to him. 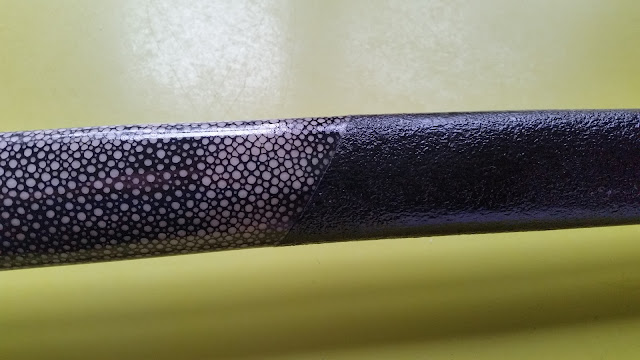 The saya is quite broad, and the copper habaki fits nicely into the koigichi (opening) with a tightness that is reassuring. The finish of the saya is half same (rayskin) and half ishime (stone finish). When we received it the ishime finish was very rough and sharp, like coarse emery paper, and would have destroyed the obi and hakama of anyone who used it. It was also not uniformly black but was a kind of blotchy dark charcoal that didn't look great up close. Because everything else was fine and the maker was in the US I didn't want to send it back so I had a go at smoothing it out with some 400 and 1000 grit paper. This took the worst of the 'tooth' off the saya's finish but it still didn't slip through the obi smoothly enough. So I painted it with a coat of polyurethane varnish and this filled in the surface enough to create a pleasingly smooth, but still 'ishime' finish. I then tried a coat of the same varnish with some Japanese ink added. To my surprise and delight this worked beautifully and brought the overall tone of the ishime to a consistent black, even up close and under strong light.

A real sword is a lot of things.

It is sharp. It is labouriously made. It is expensive. It is restricted in its use, from a legal and safety point of view. It is dangerous. It is beautiful. It is not a toy. It is a tool for killing.

It is something that we as kenshi are told from day one: "Handle the shinai as if it were a sword." And eventually we learn the actions that show this awareness. We don't drop the shinai on the ground. We don't kick it or step on it. We don't throw it. We don't lean on it like a walking stick or drape it over our shoulders. We (hopefully!) don't use it for cosplay or freestyle mucking around.

Then with more experience we learn how to properly mime drawing the shinai as if it was a sword (although significantly we don't do the same when we put it away, I've never known why this is...). And we eventually learn to make sure our cuts have hasuji (blade path and angle) at least somewhat like what would be required by a sword. Many people who do Kendo are also drawn to Iaido to add to their experience of the sword, and it is here that they receive a proper education in handling the sword.

My approach to Kendo would be described as 'traditional' I suppose and one of the meanings of this is that I believe good Kendo does not stray too far from the principles of use required by the Japanese sword. I also try to give all my students the benefits of the things I've learned from koryu iai, so that even if they don't pursue that path themselves, their Kendo will have some of that understanding. Up until now I have tried to explain and model a Kendo that has toho 刀法: understanding of the fundamental mechanics of sword use. But now we have a sword, a real sword forged and polished at a time when its makers' believed it would be used in combat. And that sword, I hope, will show us concretely, practically, the quality of our technique, that is, whether our cutting action and all the many, tiny component-actions it requires are sufficient to cut through a solid object. Will the sword cut or will it get jammed in the target?

There is value in this feedback. Although it is not crucial for the modern-day kenshi who will never use a sword, it is still informative to know what happens at that precise moment when the mono-uchi of a real sword touches the surface of its target. There is no other drill that can provide this knowledge.

Importantly for me as instructor, and guardian of not only the tradition but my students' safety, there is also value in making sure correct handling etiquette is strictly observed, from the moment each person receives the sword to the moment they hand it back.

These things I hope will add depth to my students' Kendo, as well as to their understanding. 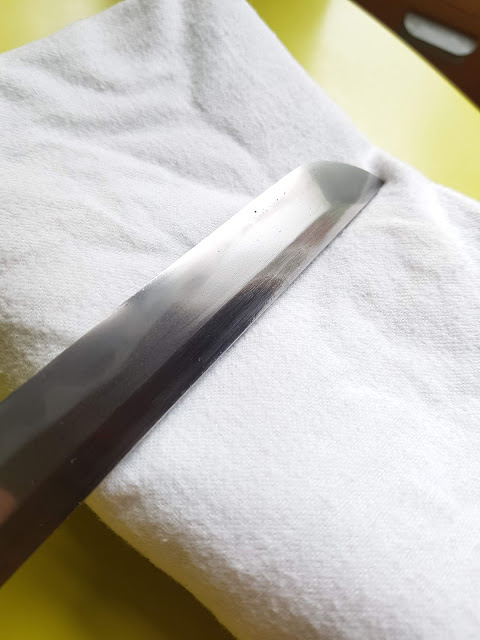