Whether crucible or anvil, gradings transform 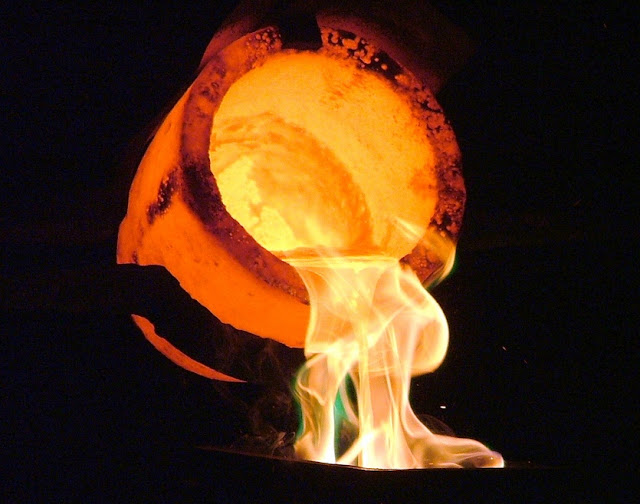 When I wanted to describe the testing aspect of Kendo grading, the part that makes it difficult, I naturally thought of the term "crucible". A crucible is a special container designed to be heated to extreme temperatures. In English usage it is also used to describe a test or trial of extreme difficulty where the final result is something new. In the crucible, metals are melted together to form an alloy. The metals are transformed by melding together and the final result is something stronger than the original.

But what would the Japanese or Kendo metaphor be? Because of its connection to the process of making swords, in Kendo the metaphor used is forging, tanren 鍛錬. Metal is forged when it is beaten repeatedly with a hammer. The beating slowly changes the structure of the metal, strengthens it and forces out impurities in the form of sparks.

As a metaphor it has the same intention as the term crucible. Both are used to describe why it is important to push through situations that are difficult.

We don't understand when we are in the middle of it, but the important fact is that when the process is over we will be transformed. We will be an alloy that is stronger than the original metal. We will be shaped and strengthened with the 'impurities' forced out.

The process has a purpose. It will come to an end and it will be worth it.

It also points out to us that this is something that doesn't happen by itself. Iron ore in the ground doesn't transform itself into steel. It just stays lying in the ground. Some coal turns into diamond, but only when, by some geological fluke, it happens to come under extreme pressure. Most coal just stays there, being coal.

Unlike coal, people can choose to transform themselves by subjecting themselves to intense pressure. This is important. Because when you find yourself in the crucible, when you are the piece of metal being smashed between the hammer and the anvil, you can remember that you were the person that put yourself there.

What difference does this make? It makes all the difference! Being beaten up when it's not your choice is, by definition, punishment. Punishment is designed to weaken, not strengthen. So it has the exact opposite effect. By remembering that this process is something you chose for yourself puts you back in the driver's seat. Everything that then happens is part of a strengthening, learning, purifying process.

One of my favourite Zen priests, Shunryu Suzuki said, "Hell is not punishment. Hell is training." He was taking this idea even further. He meant that even things that many people think of as punishment, things we didn't consciously choose to happen to us we can transform into things that are part of our 'training' if we have the right mindset.

So the small process of a Kendo grading can have enormous implications for the rest of our lives if we choose to see it that way.

I have done many Kendo gradings and I came late to the crucible. My first grading I double-graded to 4th kyu. Thereafter I passed every grade on the first attempt. Sixth dan has been my first taste of this painful forging process. I have had to remind myself time and again that the process is worth it, that it will come to an end, that I chose this for myself and indeed that I am very lucky to be able to be a part of it. I have learnt that in failure there is a lot to be gained. Each time I've been able to discard bad habits and attain new skills. I have been strengthened and my Kendo (slightly) purified. Even after failing three times, I know I have learned more and improved more than had I just turned up to training with no purpose. That would have been the way to remain as just a piece of coal lying in the ground.

golivers travels said…
Thank you for this Sensei Ben Sheppard. I failed yondan seven times over many years but passed on my eighth attemp. "Seven times down, eight times up". Perhaps at he time it did teach me resilience and to never give up but then l passed god an on my first attempt. There are so many lessons fashioned by so many individual journeys. I will share this article with my students and friends. My thanks again for your insights.
March 8, 2016 at 8:02 PM

Meeko :D said…
Wonderful reflection on grading, sensei. I'm taking this to heart and sharing this with others.
March 9, 2016 at 3:22 PM