Intention: the difference between kendo and pillow-fighting 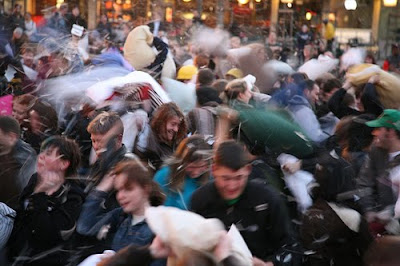 One of the most important things about kendo is intention. You can't score a point if the shinpan think that you accidentally hit the target area. An intention is an aim or plan. You have a plan to do something then you carry it out. In kendo there are no accidental cuts. We would say that all cuts in kendo must be deliberate, which means something done consciously and intentionally; fully considered, not impulsive.

Why is it so important?
Without intention, kendo would become wild and chaotic. There would be no need to train because a beginner would be just as likely to score with a 'fluke' shot as would a more experienced person. This would make kendo about as meaningful as a pillow fight: lots of fun for a short time, but not something you would spend your life studying.

How do you show intention?
In kendo there are several ways we show intention:
One of the ways that the rules of kendo guarantee our cuts were intended is that these three aspects must take place together. When this happens we say there is yuko datotsu, or the requirements for a valid strike. In a competition this leads to being awarded ippon.

But what are the nuts and bolts of 'intention'?

Sutemi
捨て身 Sutemi or to "sacrifice yourself" is an important kendo concept. It means that once you have made up your mind what you are going to do that you throw everything into your attack; holding nothing back in reserve, not even the slightest shred of doubt or desire to protect yourself from any counter attack. This is how we practice kendo until the level of about 3rd dan, with great vigour and energy, not worrying too much about anything but our own commitment to our attacks. From 4th dan onwards, a different approach is required, but one that requires a solid basis in training with sutemi in order to be successful.

Katte utsu
勝って打つ Katte utsu or "win first, then strike" means that you should create the opening in your opponent's defenses before cutting. It also means not having a strategy of just charging headlong at your opponent with a barrage of attacks and hoping that one of them gets through. Katte utsu is not something we can achieve every time. It is something to strive for, like mushin, and sometimes we get a glimpse of what it means in practice.

Katte utsu is a direct contradiction of sutemi and seems to cancel it out, but kendo we know is full of paradoxes. Katte utsu requires the ability to apply convincing seme (attacking pressure, threat) to your opponent in order to make them hesitate. Without a solid grounding in the practice of sutemi, which you could call "the ability to attack 100% no matter the odds", your seme will lack sufficient threat and your opponent will not be put off. When your seme does have this authority then you will be able to control your opponent.

It should be mentioned that you will naturally find you can apply katte utsu against those less experienced than you most easily, those with the same experience only sometimes, and those with greater experience almost never. From 4th dan onwards, katte utsu should become central to your kendo, replacing sutemi but still informed by it. And even if you are a long way off reaching 4th dan, it may be helpful to know a little of what lies ahead.

Conclusion
Intention means having a plan of what you want to do. Obviously in kendo it is then necessary to put that plan into action. In the beginning you might be happy to seize opportunities that come about by themselves. In English this is called being opportunistic. But as you progress, you learn how to make those opportunities happen. In effect you are no longer a passenger in the car, you are now the driver who decides which way to go.

This article has been a brief look at the idea of intention as it applies to kendo, and some methods of applying it. However it is a very subtle idea and requires practice and your own research in order to understand it for yourself. b
Labels: kendo theory seme strategy

After reading the last post I was wondering if in fact there is such a direct contradiction between the concept of Katte utsu and Sutemi. I see that these apply to two slightly different processes, which do not fully overlap both in time and in scope. Please correct me if I am wrong. In Katte utsu it seems that the focus is on the creation of an opportunity for an attack - a winning situation, while sutemi seems to follow it, and be rather focused on the execution of an attack, in particular with the proper spirit.
September 17, 2010 at 12:40 AM

Nanseikan said…
Thanks for your comment, sorry it has taken me so long to reply.

The point I was trying to make was that if you have really unbalanced your opponent, if you have really "won" (katte) then you can theoretically "strike" (utsu) at will. There is not the sense of desperate urgency implied in the term "sutemi".

Of course you are right that the two terms superficially refer to different stages of the cut, but more correctly they refer to different levels of proficiency in kendo, with the latter stage seemingly cancelling out the earlier stage. Katte utsu is a much higher level of skill than sutemi, but requires a great deal of sutemi training to be able to reach the level of katte utsu. As we all know though, one rarely is able to perform 100% exactly as one would like, all the time. Against a difficult opponent it might be necessary to return to a more sutemi attitude. And one would think that once a kendoka had reached the level of being able to achieve kate utsu regularly against most opponents, that their kendo would also contain a kind of sutemi commitment to every cut.